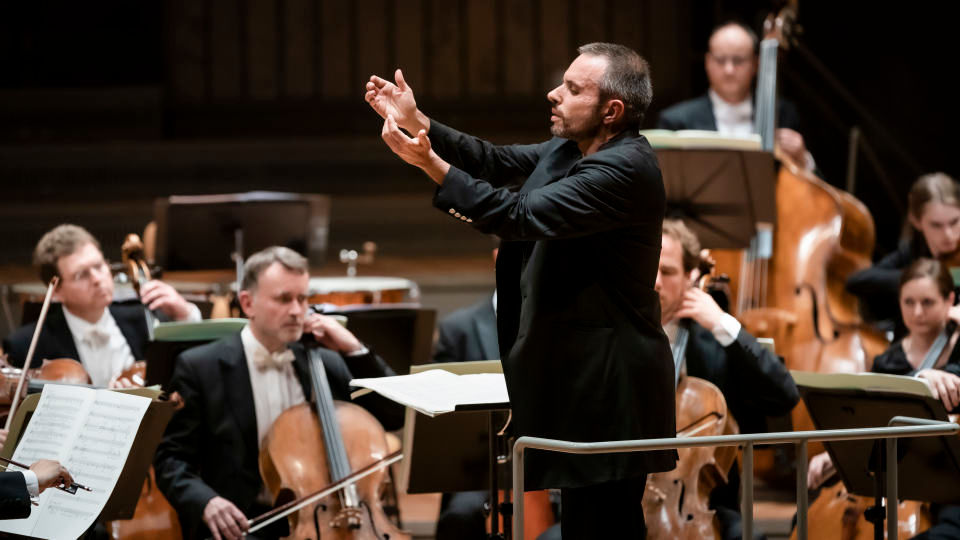 Berlin opera fans already know him because of his guest conducting engagements at the Staatsoper Unter den Linden and the Komische Oper. Now Constantinos Carydis, who was born in Athens in 1974, makes his conducting debut with the Berliner Philharmoniker at these concerts. Carydis, who received the Bavarian State Opera’s Carlos Kleiber Prize in 2011, studied at the conservatory in his native city (music theory and piano) and the University of Music and Performing Arts in Munich (conducting). His first engagements took him to the Munich State Theater on Gärtnerplatz and the Württemberg State Opera in Stuttgart. In 2006 he made his debut at the Vienna State Opera, then five years later at the Royal Opera House Covent Garden. He is a regular guest at such renowned opera houses as the Bavarian State Opera, the Frankfurt Opera, the Netherlands Opera and the Lyon Opera. Festival productions have taken him to Salzburg, Edinburgh, Glyndebourne and Ascona. Carydis also conducts such leading orchestras as the Bavarian Radio Symphony Orchestra, the NDR Elbphilharmonie Orchestra, the Orchestra of the Accademia Nazionale di Santa Cecilia, the Mahler Chamber Orchestra, Zurich’s Tonhalle Orchestra, the Mozarteum Orchestra and the Bamberg Symphony.

For his debut with the Berliner Philharmoniker Carydis, who conducts without a baton, has chosen works by two of the important symphonists of all time: Wolfgang Amadeus Mozart and Dmitri Shostakovich. The concert opens with Mozart’s C major Symphony, K. 338, the composer’s last contribution to the genre from his Salzburg years. Mozart’s “Prague” Symphony, composed 16 years later, concludes the concert, making it clear how important Mozart’s developments were for the history of this genre. Between these works, two chamber music compositions by Shostakovich will be heard in arrangements for string orchestra: the composer’s Two Pieces for String Octet, op. 11, an early work, and his String Quartet No. 8 in C minor, which violist and conductor Rudolf Barshai arranged as a chamber symphony. Barshai’s arrangement met with Shostakovich’s approval, and the composer declared: “Why, that sounds better than the original!” A programme that is rich in contrasts and offers Carydis the opportunity to display the many facets of his artistry at his Philharmonic debut.

Mozart and Shostakovich: Lodestars of early and modern symphonies

The symphony is regarded as the king of 19th-century genres, a judgment which seems well founded in light of Beethoven, Schubert, Schumann and Mendelssohn as well as Bruckner, Brahms, Dvořák and Tchaikovsky but which misses the significance of the symphony in the 20th century even well beyond Shostakovich. And focusing on Romanticism and late Romanticism often leads to the thematization of Johann Stamitz, Joseph Haydn and Wolfgang Amadeus Mozart as mere precursors. They are relatively less often encountered in our concert halls, and many music lovers miss “genuine” tragedy and drama in these 18th-century masters. Apart from a few late symphonies by Haydn and Mozart, a personal touch is sometimes found wanting. The tendency towards creating increasingly distinctive works had actually only taken hold in 1770. Until then, period style dominated personal style. That is why we have such difficulty in precisely distinguishing individual compositions. Who is able to whistle from memory some themes from Mozart’s middle-period symphonies? With Beethoven and his followers, on the other hand, any halfway musical ten-year-old can manage it.

Which is why it is even more tempting to hunt for elements of a personal style in the first symphonies. They are certainly present but are much subtler. Mozart’s C major Symphony K. 338 could be called the first “Romantic” – or, at the least, “early Romantic” – creation in this genre. With its streaming melodies, the peculiar vacillation between major and minor of the opening movement, whose mysteriously whispering development section resorts to the harmonically remote key of A flat, it is quite unlike the typical symphony of its day. In the Andante we encounter those ambivalent moods so beloved of the Romantics, while the finale, rushing past in 6/8 time, even outdoes the turbulent exhilaration of Haydn.

Why Mozart eliminated the minuet originally intended for this symphony has always been a subject of discussion. Did the courtly dance incur the displeasure of Prince-Archbishop Colloredo who brandished the sceptre in Salzburg and treated Mozart like a lackey? A few conductors insert the later minuet K. 409, but that is hardly a plausible replacement because its dimensions burst the structural seams of the work as a whole. In addition, its use of the flute makes little sense, is indeed uneconomical in an otherwise flute-free symphony. The minuet would expand the three-movement form, originally derived from the opera overture, to the classical Viennese four movements – and that too would be wrong. Mozart’s C major Symphony K. 338 displays the Janus-faced features typical of his Salzburg period: we can already sense the advent a new age but what we hear still belongs to the old one – most conspicuously in the festive Baroque pomp of the opening bars.

In the “Prague” Symphony in D major, K. 504, the absence of a minuet is downright ominous – Mozart deigned to provide all his other late symphonies with a dance movement. But then, everything about this work is puzzling. The biography of its creator offers no clues to its dark, impassioned and, at times, doleful character. The first movement was even described as “militaristic” – but in 1786, for a change, peace prevailed in central Europe... The composition begins with an Adagio that seems hopeful at first but soon darkens threateningly and ends in melancholy, indeed resignation. This introduction is followed by the “militaristic” Allegro, whose polyphony and counterpoint are unparalleled in the music of that time. For the development, Mozart utilizes exclusively the thematic material of the first 30 bars, introducing – in contrast to previous practice – no new melodies. Even the second theme, which prefigures Schubert, is merely an episode. On repetition it immediately slips into the minor and then is heard only once more, in the recapitulation. Lacking entirely is a coda, the customary, mostly triumphal summing up. Instead the movement breaks off with the insistently reasserted first Allegro theme.

In the Andante, the agitation clearly continues to reverberate. The mood relaxes into a cloudless subsidiary theme, but this lightening is only of brief duration. It is thwarted by the main theme and its subsidiary idea in minor as well as the troubled emotions that fill the development section. Throughout the movement a recurring, throbbing quaver (eighth-note) figure persistently generates a sense of unrest. And yet – as always in Mozart – the sorrow is masked by the beauty. The lyricism of his themes blurs the fact that these are poignant songs. The same holds true in the third movement, which the superficial listener could mistake for an upbeat finale. In fact, this energetic Presto, urgently pulsating throughout, is a somewhat more optimistic continuation of the fatalistic opening movement, whose form – not surprisingly – it also shares.

Futurism took root in Russia before World War I and survived until Stalin seized power. As a student, Dmitri Shostakovich was swept up in this trend, though without sharing its members’ optimistic spirit. His Eight Preludes for piano op. 2, the Three “Fantastic” Dances op. 5 and the Suite for two pianos op. 6 demonstrate both his closeness to and his distance from the Futuristic style phenomenon, but, like the Piano Trio in C minor, op. 8, they still tend to uphold its basic concepts. It is only with the Two Pieces for string octet op. 11 that Shostakovich conjures that depressive mood in which hopeless melancholy and bizarre gallows humour are superimposed. The death of his father, the family’s financial ruin, plus a diagnosis of incurable tuberculosis – there’s no denying the biographical background to this composition dating from 1924-25 and probably conceived originally as a larger work. Shostakovich dedicated it to the memory of a friend of his youth, the poet Volodya (Vladimir) Kurchavov, who died young and remained virtually unknown. Both movements are in minor. Pallid, funereal moods alternate with exuberant reminiscences; in the hectic second movement sharply grating dissonances, grotesque chirping and frequent glissando effects prevail – signs of an illusive gaiety which, at times almost sarcastically, negates the tragic seriousness of life. The most important of Shostakovich’s early works, apart from the First Symphony, it is heard this evening in a version for chamber orchestra.

There are chamber versions – some with wind – of Shostakovich’s String Quartets Nos. 3, 4, 6, 7, 8, 10 and 15. A number of them were made by his composition pupil Rudolf Barshai, founder of the Moscow Chamber Orchestra, who was also a passionate Mozart conductor. The best known is the Chamber Symphony in C minor, op. 110a, based on the Eighth String Quartet and authorized by Shostakovich. It contains five movements, played without a break. The first Largo is a fugato on the grave four-note motif that returns at the end of the work. It is followed by the aggressive-sounding Allegro molto, which quotes the well-known Jewish lament from Shostakovich’s E minor Piano Trio op. 67. The ensuing Allegretto brings an alienated waltz, at once banal and creepy. Three pounding chords open and shape the Largo fourth movement. Its middle section, dominated by the solo cello, rises again to a lament in C sharp minor. The finale is another fugal Largo. It ends with the work’s principal motif, formed from Shostakovich’s initials in German D-(E)S-C-H, which correspond to the notes D-E flat-C-B.

Constantinos Carydis, born in Athens in 1974, studied piano and music theory at the conservatory in his home town. For his training as a conductor, he went to the University of Music and Performing Arts in Munich. First engagements took him initially to the Staatstheater am Gärtnerplatz in Munich and the Staatsoper Stuttgart. Since then, Constantinos Carydis has regularly worked as an opera conductor with Bayerische Staatsoper and Oper Frankfurt as well as at the Royal Opera House Covent Garden, the state opera houses in Vienna and Berlin, Nederlandse Opera, the Komische Oper Berlin and the Opéra de Lyon in addition to the festivals in Edinburgh and Athens. In the summer of 2018, Constantinos Carydis conducted a new production of Mozart’s Zauberflöte with the Vienna Philharmonic at the Salzburg Festival, and Handel’s Serse at Oper Frankfurt in January 2019. Concert engagements have also taken Constantinos Carydis to the conductor’s desk of top international orchestras (including the Symphonieorchester des Bayerischen Rundfunks, NDR Elbphilharmonie Orchester, Deutsches Symphonie-Orchester Berlin, Konzerthausorchester Berlin, Orchestra dell’Accademia Nazionale di Santa Cecilia, Mahler Chamber Orchestra, Orchester Philharmonique du Luxembourg). In 2011, he was awarded the Carlos Kleiber Prize by the Bayerische Staatsoper. In these concerts, Constantinos Carydis now appears as a guest of the Berliner Philharmoniker for the first time.

Works by Mozart and Haydn with Adam Fischer and Julia Lezhneva

A Mozart evening with Daniel Harding