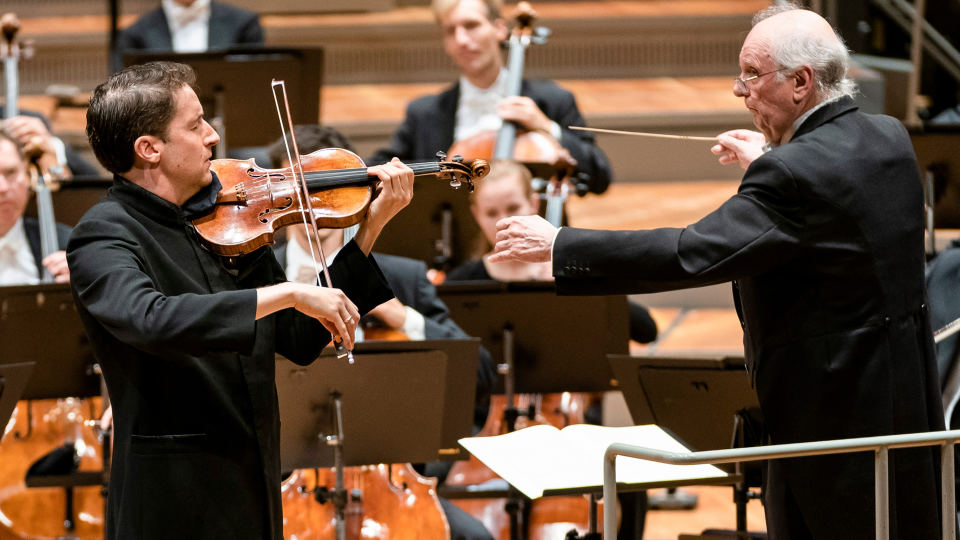 With this programme we commemorate Max Bruch, the 100th anniversary of whose death is remembered in 2020. Our 1st concertmaster, Noah Bendix-Balgley, is the soloist in this performance of Bruch’s First Violin Concerto with the Berliner Philharmoniker under the baton of Marek Janowski. With its yearning opening movement and sparkling finale, this work became the composer’s most popular work. The second part of the concert is dedicated to Johannes Brahms, a contemporary of Bruch. His Serenade No. 2 is characterised by the dark, warm sound typical of Brahms and is considered a milestone on the composer’s path to the symphony.

Paths to the Symphony

Max Bruch died exactly 100 years ago, on 2 October 1920, in Berlin. Throughout his life the Cologne native was not particularly known for modesty. He could engage in fierce polemics, especially when he had to defend his conservative style against attacks by the progressive camp. He was also annoyed that the criticism continually compared him unfavourably with Johannes Brahms, who was five years older. “If I meet with Brahms in heaven,” Bruch wrote in frustration to their mutual publisher, Fritz Simrock, “I shall have myself transferred to hell!”

During an interview Bruch later commented candidly with the maturity of an almost 70-year-old: “Brahms was for a variety of reasons a much greater composer than I. … In fifty years, his splendour will shine bright as the towering composer of all time, while I will be mainly remembered only for my G minor Violin Concerto.” This realization was undoubtedly bitter for Bruch, all the more so because it was an early work that overshadowed all his subsequent compositions.

Bruch was in his mid-twenties when he composed his first great instrumental work with the active assistance of his and Brahms’s friend, the violinist Joseph Joachim, after already making a name for himself with choral works. The concerto, which is audibly in the tradition of Mendelssohn, combines a lyrically melodious tone with weightless virtuosity and the Hungarian accents popular at that time, and it quickly became an audience favourite after its enthusiastically acclaimed premiere in 1868. The blessing of success became a curse for Bruch, however, because audiences only wanted to hear this one work of his. But the Concerto had finally inspired him to compose more instrumental music, and he wrote his first symphony during the same year as the premiere. Bruch self-confidently and appreciatively dedicated it to Brahms.

Johannes Brahms, on the other hand, took much longer to forge his path to the symphony. His attempt to recast a sonata for two pianos as a large-scale orchestral work resulted in the First Piano Concerto, the Leipzig premiere of which in 1859 was a traumatic fiasco for the 25-year-old. Concurrently with this project Brahms was also working on two orchestral serenades between 1857 and 1859. While the first was composed after his study of Haydn symphonies, as one can hear, during the composition of the second Brahms was inspired by Mozart’s wind serenades – Joachim had sent him the scores in preparation.

In the A major Serenade Brahms reinforced the low register of the winds with violas, cellos and double basses, thus giving the work a particularly warm sound. The composer, who was notorious for his irony, was more openly enthusiastic about his “tender” Serenade than any of his other works: “Rarely have I written music with such relish; the sounds permeated me so lovingly and gently that I was cheerful through and through.” This was to remain Johannes Brahms’s last orchestral work for a long time. Although Joseph Joachim found that “symphony is proclaimed” by the Serenade, the music world still had to wait 16 years for Brahmsʼs First.

Berlin audiences associate the name Marek Janowski above all with the Rundfunk-Sinfonieorchester Berlin, whose musical profile Janowski decisively influenced as its chief conductor from 2002 to 2016. However, his work together with the Berliner Philharmoniker is less well known. The Warsaw-born conductor who grew up in Wuppertal made his debut here in 1976 at the age of 37. Marek Janowski, then chief conductor of the Dortmunder Philharmoniker, was at the beginning of a career which was to take him to the Orchestre Philharmonique de Radio France (1984–2000), the Dresden Philharmonie (2001–2003 and again from 2019) and the Orchestre de la Suisse Romande (2005-2012). Janowski has made a name for himself above all as an interpreter of the late-Romantic repertoire. He also enjoyed international success as an opera conductor and was regarded as one of the outstanding interpreters of Richard Wagner. In the 1990s he decided not to conduct any more staged opera performances because he no longer felt able to identify with contemporary music theatre. The only exception was in 2016 and 2017 when he conducted Wagner’s Ring des Nibelungen at the Bayreuth Festival. In 2017, Marek Janowski returned to the Berliner Philharmoniker after an absence of more than 20 years with Verdi’s Requiem and Bruckner’s Fourth Symphony. He once described his creed as follows: “One must strive to do right by the fundamental meaning of the compositional statement of a work – not to be right!”

The violinist Noah Bendix-Balgley owes his career to a children’s book. As the four-year-old Noah always loved looking at Karla Kuskin’s The Philharmonic gets dressed, his parents thought he would enjoy learning the violin. They were right. “The violin allows me to express my emotions and thoughts,” says the North Carolina-born musician. He played for Yehudi Menuhin when he was only nine years old. He later studied at Indiana University and at the University of Music and Performing Arts Munich under Mauricio Fuks, Christoph Poppen and Ana Chumachenco. He has won prizes at major competitions, including the Concours Reine Elisabeth in Brussels and the Concours International Long-Thibaud in Paris. Noah Bendix-Balgley began his career as an orchestral musician in 2011 as concertmaster of the Pittsburgh Symphony Orchestra, and in 2014, he became first concertmaster of the Berliner Philharmoniker. He also continues to appear regularly as a soloist and chamber musician. In 2018, Noah Bendix-Balgley appeared for the first time as soloist and conductor with his orchestra. The programme included Mozart’s Violin Concerto No. 5 and Saint-Saëns’ Introduction et Rondo capriccioso. He has been playing Max Bruch's First Violin Concerto since the age of 12: “It has everything one desires in a Romantic concerto: lyrical melodies, recitative-like cadenzas, technical fireworks for the soloist, and rhythmic drive and drama.”

Bartók and Brahms with Herbert Blomstedt and András Schiff