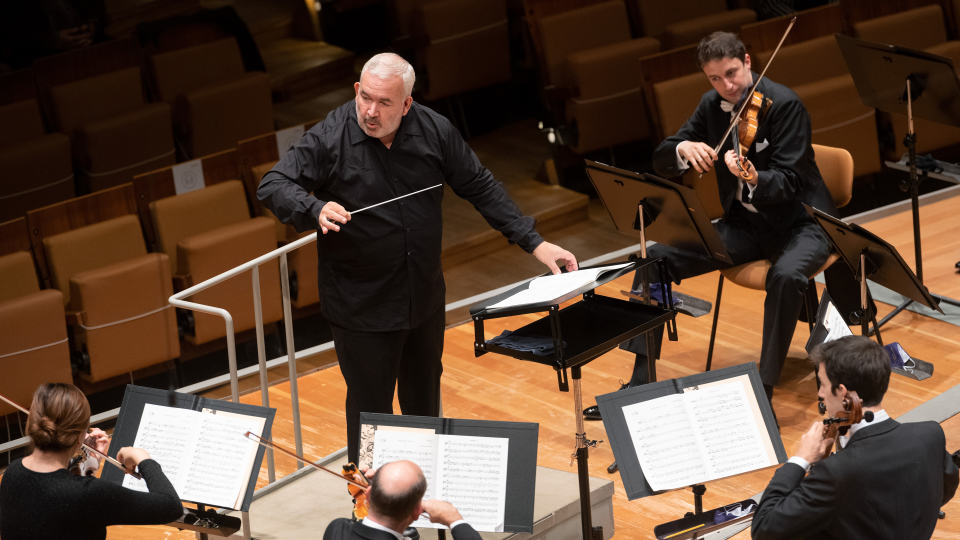 God, rebel and bringer of fire – Prometheus is one of the most important figures in Greek mythology, a shining example of the Enlightenment and a symbol of its impossibility at the same time. Many artists felt called upon to interpret his story. Beethoven reworked Prometheus’ advocacy of mankind through his theft of fire into a heroic-allegorical ballet. It is preceded by a thematically related work, Joseph Haydn’s so-called “Fire Symphony” which is characterised by a passionate, dramatic tone.

For Joseph Haydn, the appointment as director of music for Nikolaus I, Prince Esterházy, meant not only a secure income but also artistic isolation. During the summer months, the royal household resided first at Eisenstadt in Austria and, after 1766, also regularly in Fertőd, Hungary, approximately 100 kilometres from Vienna, where the prince had had a hunting lodge owned by his family expanded to a magnificent rococo palace. “I was cut off from the world,” Haydn recalled later, but it was precisely this fact that offered him the opportunity for compositional experiments, since “there was no one in my vicinity to confuse or torment me, and so I was forced to become original.”

Haydn was fortunate; the prince and the small audience at the court were enthusiastic about his creative spirit, which was particularly audible in his numerous symphonies. In his Symphony No. 59, composed in 1768, Haydn plays with extreme dynamic contrasts, and as a surprise effect he suddenly has the horns enter with a fortissimo fanfare just before the close of the graceful Andante. The symphony opens with an energetic leaping motif, an original inspiration that inflames the vehement first movement – it is no wonder that a contemporary of Haydn’s nicknamed the work the “Fire Symphony”.

Ludwig van Beethoven composed his ballet music to The Creatures of Prometheus in the wake of the success of Haydn’s Creation, which was premiered in Vienna in 1798 and to which Beethoven’s work is thematically related. The focus of the ballet is the Titan Prometheus – literally the “Forethinker” – who steals fire from the gods in order to help the human race by giving it life and civilization. The ancient myth could scarcely have been more timely, since the rebellious Prometheus must have reminded everyone of Napoleon Bonaparte at that time. It was no different for Beethoven, as one can see from the fact that he borrowed the theme of the ballet’s finale two years later for his “Eroica”, which was originally dedicated to the French military leader, whom Beethoven had initially admired.

Choreographed by Salvatore Viganò, the dramatic ballet – an innovative genre, which competed with the more pantomimic, static ballet of the old style in Vienna – did not focus on Prometheus but, in keeping with the title, his creatures. The divine spark brought the first two humans, formed of clay, to life. Only through the arts, however, could they learn to feel and reason, which ultimately makes Apollo, Bacchus and the Muses the real heroes. But anyone who expected a cheerful dance of the Muses against an unobtrusive musical backdrop in those days did not know the composer very well. As in his First Symphony, Beethoven began the overture self-confidently and unconventionally, with a tension-charged chord striving for resolution. “Everything is laid out too grandly for a divertissement, which is what the ballet should actually be,” one critic complained after the premiere. But for Beethoven, humanistic education through (musical) art was unquestionably a very serious matter – and not simply light entertainment.

Marc Minkowski likes to describe himself as a chameleon, as someone who is as at home in the Baroque repertoire as he is in the First Viennese School and Romanticism. “I don’t hold with these strict repertoire limits. For me it is more a question of attitude than of sound,” he said in an interview. The Frenchman is one of the conductors who first attracted attention with his own ensemble as a specialist for historically informed performance practice, only to later be highly successful at the podium of international symphony and opera orchestras with works from the popular concert and opera repertoire. Marc Minkowski, who began his musical career as a bassoonist, likes to name Neville Marriner and Nikolaus Harnoncourt as his role models. At the age of 19, he founded the ensemble Les Musiciens du Louvre, which gained worldwide recognition for its energetic, rhythmically captivating style of music-making. Inquisitive and eager to experiment, Marc Minkowski is always looking for new challenges. He was artistic director of the Salzburg Mozart Week from 2013 to 2017, and in 2016 he took over as general director of the Opéra National de Bordeaux. He made his debut with the Berliner Philharmoniker in 2003 with a programme of French music. In 2018, he was invited to share his experience and knowledge in a concert project with works by Schubert, Haydn and Mozart with the students of the Karajan Academy.