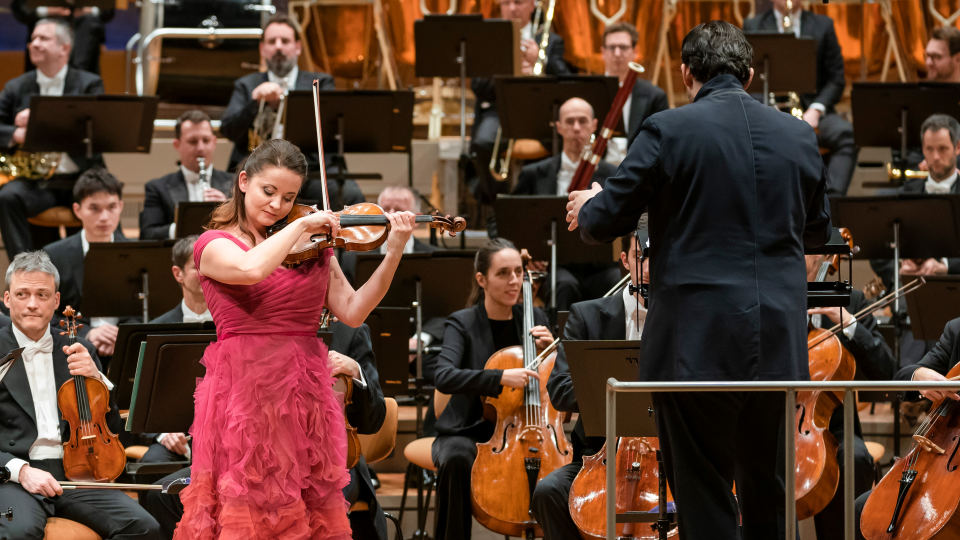 Actually, eleven-year old Andris Nelsons was only looking for music for meditation when he came across Gustav Mahler’s First Symphony, where he was immediately enthusiastic about its mystical atmosphere of nature. Here the Latvian conductor – one of the leading Mahler interpreters of our time – is presenting the composer’s first symphonic work with the Berliner Philharmoniker. In addition, we will hear Igor Stravinsky’s violin concerto with soloist Baiba Skride, who for many years has been one of Andris Nelsons’s artistic partners.

Andris Nelsons is music director of the Boston Symphony Orchestra (since autumn 2014) and Gewandhauskapellmeister in Leipzig (since February 2018). These two positions resulted in a pioneering alliance between both institutions, marked by joint performances in Boston’s Symphony Hall in autumn 2019 Throughout his career, Nelsons has established regular collaborations with the Wiener Philharmoniker, Symphonieorchester des Bayerischen Rundfunks and the Royal Concertgebouw Orchestra. In addition he regularly conducts performances at the Bayreuther Festspiele and at the Royal Opera House Covent Garden. He has also been a regular guest with the Berliner Philharmoniker since his debut in October 2010.

Born in 1978 into a family of musicians in Riga, he began his career as a trumpeter in the orchestra of the Latvian National Opera before studying conducting in Riga. He became a student of Alexander Titov in St Petersburg; and attended masterclasses with Neeme Järvi and Jorma Panula, Mariss Jansons is his most important mentor. Andris Nelsons was music director of the Latvian National Opera from 2003 to 2007, principal conductor with the Nordwestdeutsche Philharmonie in Herford from 2006 to 2009, and from 2008 to 2015 he took on the same role with the City of Birmingham Symphony Orchestra.

Baiba Skride, equally born into a musical Latvian family, began studying the violin in her hometown of Riga. From 1995 she was taught by Petru Munteanu at the Rostock University of Music and Drama, and in 2001 she won first prize at the Concours Reine Elisabeth in Brussels. The list of prestigious orchestras with whom she has worked include the Symphonieorchester des Bayerischen Rundfunks, the Gewandhaus Orchestra in Leipzig, the London Symphony Orchestra, New York Philharmonic and the Orchestre de Paris. She made her debut with the Berliner Philharmoniker in October 2010 performing Alban Berg’s Violin Concerto, conducted by Andris Nelsons; she last performed with the orchestra in February 2085 playing the Second Violin Concerto by Shostakovich, conducted by Dima Slobodeniouk. Further conductors Baiba Skride has worked with include Marin Alsop, Susanna Mälkki, Yannick Nézet-Séguin, Andrés Orozco-Estrada and Tugan Sokhiev. Among her chamber music partners are Alban Gerhardt, Brett Dean, Daniel Müller-Schott, Xavier de Maistre and she also performs in trio with her sister Lauma Skride and Stefan Dohr at venues such as Concertgebouw Amsterdam, Musikverein Vienna or the Wigmore Hall London. With her Skride Quartet, founded in 2016, she toured to Australia for a series of nine recitals in November 2019. Baiba Skride plays the “Yfrah Neaman” violin by Antonio Stradivari, kindly loaned to her by the Neaman family.