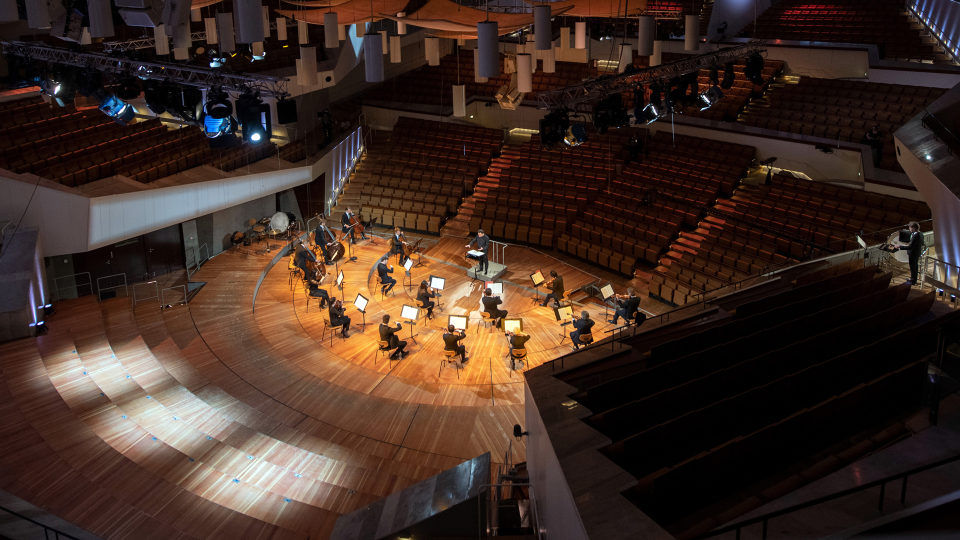 01 May 2020
Europakonzert from Berlin

Erwin Stein, a pupil of Arnold Schoenberg, arranged a version of Gustav Mahler’s Fourth Symphony for only 15 musicians for the legendary “Society for Private Musical Performances” in 1921. The institution, founded by Schoenberg, presented symphonic compositions arranged for small forces to an audience interested in contemporary music – also because the privately financed association naturally did not have a large-scale orchestra at its disposal.

For different reasons, namely health considerations, the large orchestras cannot perform during the corona crisis, so it looked like the Berliner Philharmoniker’s Europakonzert, traditionally held on 1 May each year, which was to be held for the first time under the baton of chief conductor Kirill Petrenko, would not be able to take place either. The keenly anticipated trip to the scheduled performance venue of Tel Aviv was cancelled, as was the concert tour planned for afterwards. And yet Kirill Petrenko and members of his orchestra performed on the scheduled date and at the traditional time of 11 am. The venue – in keeping with the general “stay at home” slogan – was the Philharmonie. Due to legal guidelines, no more than 15 musicians were on stage at the same time, taking into account the required minimum distance, all performers were tested for the virus – and of course spectators were not allowed in the auditorium. However, the Europakonzert was also conceived as a media event from its very beginnings. So the 2020 concert, with live broadcasts on television, radio and in the Digital Concert Hall, ultimately reached a large audience around the world despite the extremely unusual circumstances. And in Erwin Stein’s arrangement, the main symphonic work of the concert, Mahler’s Fourth Symphony, could also be performed.

However, the programme of the first half of the concert was changed: instead of Max Bruch’s Kol Nidrei and orchestral songs by Mahler based on poems by Rückert, they performed compositions by Arvo Pärt, György Ligeti and Samuel Barber for string orchestra. Pärt’s work Fratres, inspired by Gregorian chants, is one of the most famous pieces from the post-war period with its appealing harmony and structure and its ethereal sounds. Ligeti’s Ramifications, with its unusual string playing techniques and ingenious timbre effects, also brings to mind those instruments that could not be played in the Europakonzert on this occasion. And Barber’s Adagio, considered one of the saddest pieces in the history of music, expressed the worries and hardships of the present situation. The performance could also be understood as a message of support from the Europakonzert to Barber’s home country, the USA, which has been particularly badly affected by the corona crisis.

In its original version, Mahler’s Fourth Symphony also uses smaller forces compared to the preceding Symphonies 2 and 3. In contrast to the monumental substance of the previous works, the composer intended in this work to write a musical “humoresque”. Although it does not lack darker elements or irony, the symphony contains many cheerful and comforting passages. The finale, whose soprano solo was performed as originally planned by the celebrated singer Christiane Karg, tells of “heavenly life” in the unmistakable Wunderhorn style.

Andris Nelsons and Matthias Goerne with works by Tchaikovsky and Mahler