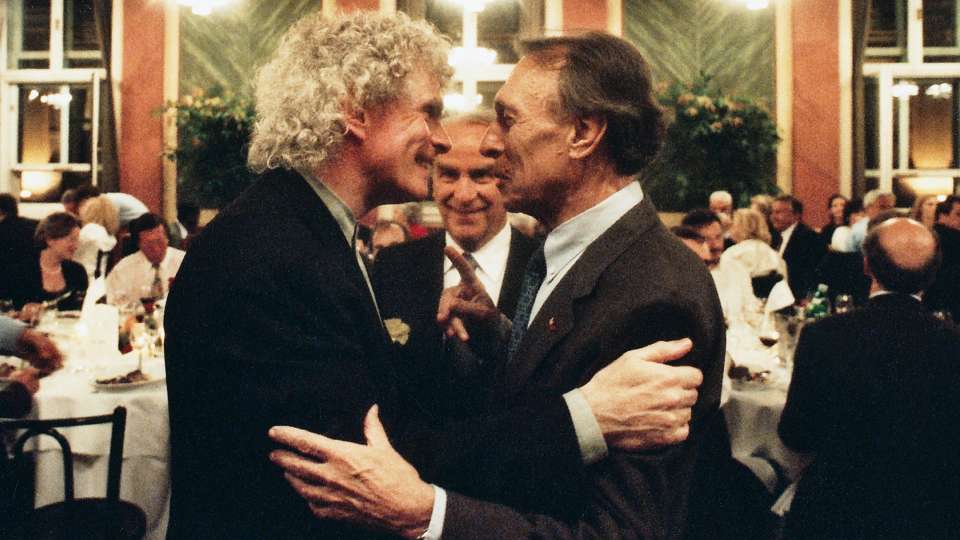 The history of the Berlin Philharmonic began with a revolution on 1 May 1882, when fifty members of the Bilse Kapelle refused to sign their new contracts and decided to form their own democratically governed ensemble without, however, being able to rely on the support of either the state or of a wealthy patron. Their enterprise was rewarded, and the orchestra continues to this day to elect its new members and principal conductors. This remains a unique form of organization for a leading orchestra of international standing.

What this means in practice is demonstrated by the present film, which follows the course of Sir Simon Rattle’s appointment as Claudio Abbado’s successor. Isabel Iturriagagotia and Paul Smaczny accompanied the orchestra over a period of several years from Abbado’s announcement in February 1998 that he would not be renewing his contract when it expired to the decision to appoint Rattle in June 1999 and to Abbado’s final concerts as principal conductor in the spring of 2002. The cameras were present when the different orchestral committees decided on the arrangements for the election – there is no fixed “constitution” in this “orchestral republic”. In the course of often heated discussions the number of candidates was whittled down to a mere handful. These candidates are able to have their say to the cameras and are seen rehearsing with the orchestra. The various working practices of international conductors such as Lorin Maazel, Esa-Pekka Salonen, Bernard Haitink, Daniel Barenboim, Sir Simon Rattle and Zubin Mehta are presented without any further comment. The result is altogether fascinating.

There was no clear winner after the first round of voting, and so the second round on 23 June 1999 proved worthy of a nail-biting detective story. In the end, however, the orchestra decided by a clear majority to elect the then forty-four-year-old Rattle: “Until I came to play Haydn with the orchestra in June I had persuaded myself that I was happy either way. But then I could no longer persuade myself that I didn’t mind. It just redoubled my certainty: this is a place where I could make wonderful music. But I thought, it’s their choice, and it’s a wonderful thing, it should be their choice.”