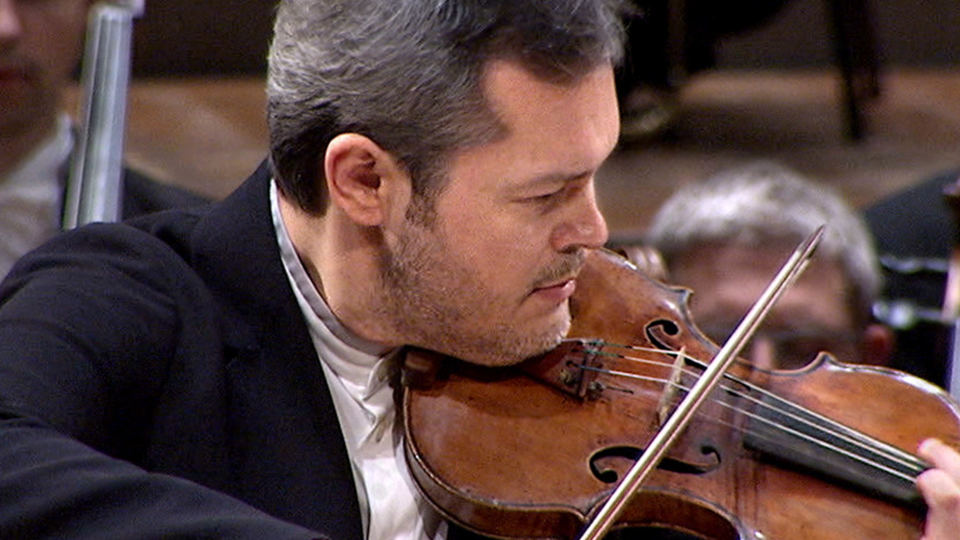 “He plays and plays and plays, always at the highest level. ... The sparks fly, the world tremors, and lava flows voluptuously from the volcano,” as the Frankfurter Rundschau wrote in 2010 about the Russian violinist Vadim Repin, who made a guest appearance shortly afterwards with the Berliner Philharmoniker performing Sofia Gubaidulina’s Offertorium. At his side was the young Norwegian Eivind Gullberg Jensen, who also conducted Sibelius’s First Symphony.

Gullberg Jensen, chief conductor of the NDR Radiophilharmonie Hannover, made his first appearance at the conductor’s stand with the Berliner Philharmoniker in this concert. A particular challenge of this concert was the wide-ranging expressive spectrum of the evening’s programme. Sofia Gubaidulina’s Offertorium is – notwithstanding several electrifying passages for the soloist – a contemplative work which both conceptually and thematically looks back to Bach’s The Musical Offering. Sibelius’s First Symphony is, on the other hand, a work of unrestrained emotion, with Scandinavian colours merging with Tchaikovsky-inspired expressiveness.

The procedure is familiar to interpreters of the Latin Mass. After the Collect, when the bread and wine are brought to the altar, a liturgical chant is heard whose origin and structure identify it as an antiphonal psalm. The exegete knows it’s time for the Offertory. If one asks why a violin concerto should have a title derived from the liturgy, the answer can be found in the biography of a composer whose pieces have always been intimate yet intense reactions to even the gentlest oscillations of the world and its protean beings.

The story’s concrete beginning, incongruously enough, can be traced to a nocturnal taxi ride through Moscow in the winter of 1977/78. In the rear of the car sit Sofia Gubaidulina and Gidon Kremer. It doesn’t take long before the great violinist is asking the composer to write a work for his instrument and orchestra. Gubaidulina is unable to get the notion out of her head and soon is attending Kremer’s concerts in order to study the musician’s “musical handwriting”. What she hears becomes an idée fixe that later finds its way into the work: it is Kremer’s singular manner of formulating extreme contrasts and the transitions between them as well as his extraordinary tone: “This uniting of fingertips with the sounding string represents the complete abandonment of oneself to tone”, Gubaidulina concludes and she begins to realise “that Kremer’s theme is the theme of the offering, the musician’s sacrifice in his abandonment of himself to the musical sound”.

The result is described as follows by Gubaidulina’s biographer Michael Kurtz: “From this experience ... a musical idea was formed ‘vertically’ in which, literally within one minute, everything came together: the multi-layered idea of the sacrifice and the composition – ‘the sacrifice of Christ’s death on the Cross, the sacrifice of God when he created the world, the sacrifice of the perpetrator, i. e. the composer’, and finally the layer represented by the work itself, in which the theme offers itself up as a musical sacrifice.” Therefore the title Offertorium. Therefore this work, which – instrumentally as well as semantically, habitually as well as biographically – is recognisably linked to its dedicatee. It would not be amiss to describe this Violin Concerto, completed in 1980 and then twice delicately revised, as an epically constructed fantasia for and on Gidon Kremer; as a sort of musical psychological study. But Offertorium is more: a musical prayer – a musical invocation, which itself almost resembles a liturgy.

Like Alban Berg’s Violin Concerto, to which it briefly alludes, Offertorium pays tribute to the art of Johann Sebastian Bach. Following a fragile, indeterminate prologue, a theme emerges from the body of sound which we recognise from the Musical Offering. Sofia Gubaidulina does not compose a fugue with it. She writes variations that disintegrate, step by step, in the first of three sections that follow one another without a break. For this she helps herself to an idea of Anton Webern’s, without denying its originator: utilising his techniques and inspired by his arrangement of the ricercar from the Musical Offering, she introduces and continues with the theme in order “to unite the two personalities in the history of music who have exerted the greatest impression on me”. The theme is then dismembered, but at the end of this work lasting over half an hour Gubaidulina reassembles it into a beautifully extended, broadly flowing, almost hymn-like melody that clearly exhibits typical features of Russian Orthodox liturgical chant.

The variety of the layers of overpainting could smack of eclecticism or a lack of originality if Gubaidulina had not also found a transcendental tone in this creation: a tone that – notwithstanding all the drastical and dramatic events that sometimes threaten it in the course of the musical unfolding – ultimately does manage to sound both transitory and artlessly simple. A tone that identifies the work, not as categorically metaphysical, but as one that evokes the ingredients of a metaphysical idea by means of its sounds.

This brings Sofia Gubaidulina close to a composer who, at least for his symphonies, laid claim to the same thing. As Jean Sibelius famously stated while working on his Fourth: “A symphony is not just a composition in the ordinary sense of the word; it is more of an inner confession.” Years later, he elaborated on this idea, writing that his symphonies were so different from each other because each one represented an inner confession but “at a different stage of life”.

When Sibelius wrote his Symphony No. 1 in E minor op. 39 in 1899, he saw himself, like countless other composers, confronted with the question of where the symphony was headed and what influence upon that direction he was willing to assume. On the one hand, he aspired to carry on the tradition that had been established since Beethoven, but, on the other, he was not prepared to put on a symphonic corset. In studying the writings of the German music theorist Friedrich von Hausegger, he came across this passage in the author’s Music as Expression of 1885 which corresponded to his own thinking: “Great artists have expanded the forms without detriment to the basic character of the musical form. The truly accomplished artist is not hide-bound by the external aspects of the form; he moulds it according to his own needs.” Sibelius took this statement to heart.

Though strictly laid out in four movements, Sibelius’s First Symphony can be understood as a large-scale fantasia. Supporting evidence for this can be found not least in the composer’s explicit marking of the finale “quasi una fantasia” (possibly also harking back to Beethoven’s piano sonatas with that heading). But not only this last movement’s design is characterised by ruptures and abrupt mood shifts. The stormy, passionate bearing of the Allegro that follows the first movement’s slow introduction underscores the notion that the composer here was concerned less with strict form than with finding extreme expression within a thoroughly organic structure.

In the Andante that follows we hear a melancholy song, full of sighs and yearning, which takes up the lyrical mood introduced by the violins in the first movement and expands them with many shadings after a first build-up of scraggy woodwind dabs quickly drifts into ghostly strains. The third movement brings contrast: a stamping peasant-dance scherzo which is triggered by a rhythmically propulsive timpani motif and then flares up violently. The easy-going trio section brings only momentary relaxation.

The final Allegro, on the other hand, betrays Sibelius’s admiration at the time for Tchaikovsky. How else to explain that this movement not only returns to the symphony’s less than hopeful opening theme, or that the whole work concludes tragically, still in E minor, the key of the Russian composer’s Fifth Symphony as well as his orchestral fantasy Francesca da Rimini? But it would be missing the point to look for a literary programme. Even Sibelius’s First Symphony was already nothing more or less than a personal confession.

Eivind Gullberg Jensen, born in Norway, has been principal conductor of the NDR Radiophilharmonie Hannover since the beginning of the 2009/2010 season. After studying violin and musical theory in Trondheim, he studied conducting with Jorma Panula (Stockholm) and Leopold Hager (Vienna). He also participated in the Aspen Music Festival with David Zinman and in masterclasses with Kurt Masur. In 2007 he conducted a new production of Tosca with the Deutsches Symphonie-Orchester Berlin for the Festspielhaus Baden-Baden, and a production of Fidelio with the Mahler Chamber Orchestra in 2008. Following a celebrated debut at Zurich Opera with Peer Gynt, he was engaged to return again to conduct Martinů’s The Greek Passion in the autumn of 2008. This was followed in the spring of 2008 by his debut with English National Opera in a production of Janáček’s Jenůfa, and a further debut at the Norwegian National Opera in Oslo with Dvořák’s Rusalka. As a guest conductor, he has received invitations – often on more than one occasion – from orchestras such as the Orchestre de Paris and the Orchestre National de France; he also makes regular appearances with the Oslo Philharmonic Orchestra. Eivind Gullberg Jensen has close artistic partnerships with soloists such as Truls Mørk, Leif Ove Andsnes, Nikolai Lugansky and Hélène Grimaud. This will be the first time he takes to the conductor’s stand of the Berliner Philharmoniker.

Vadim Repin, born in Novosibirsk in 1971, studied as a child with the famous violin virtuoso and teacher Zakhar Bron. His remarkable career started after winning the renowned Concours Reine Elisabeth in Brussels in 1989, taking him to the concert platforms of music capitals all over the world. In his wide-ranging repertoire, Vadim Repin places particular emphasis on new music such as Sofia Gubaidulina’s Offertorium and the violin concertos of John Adams and Daniel Brubaker. He has been invited to perform as a soloist by many major conductors and orchestras. His chamber music partners include leading virtuouso instrumentalists; the pianists Nikolai Lugansky, Itamar Golan and Zoltán Kocsis accompany Vadim Repin’s violin recitals. Winner of the ECHO classical “instrumentalist of the year” award in 1999, the violinist first performed with the Berliner Philharmoniker at the Waldbühne on 23 June 2002, conducted by Mariss Jansons; on 1 May 2008 he was the soloist in Max Bruch’s Violin Concerto No. 1 in G minor op. 26 at the orchestra’s European Concert in Moscow (conductor: Sir Simon Rattle). Vadim Repin plays the “von Szerdahely” violin by the violin maker Giuseppe Guarneri (del Gesù) from 1736.