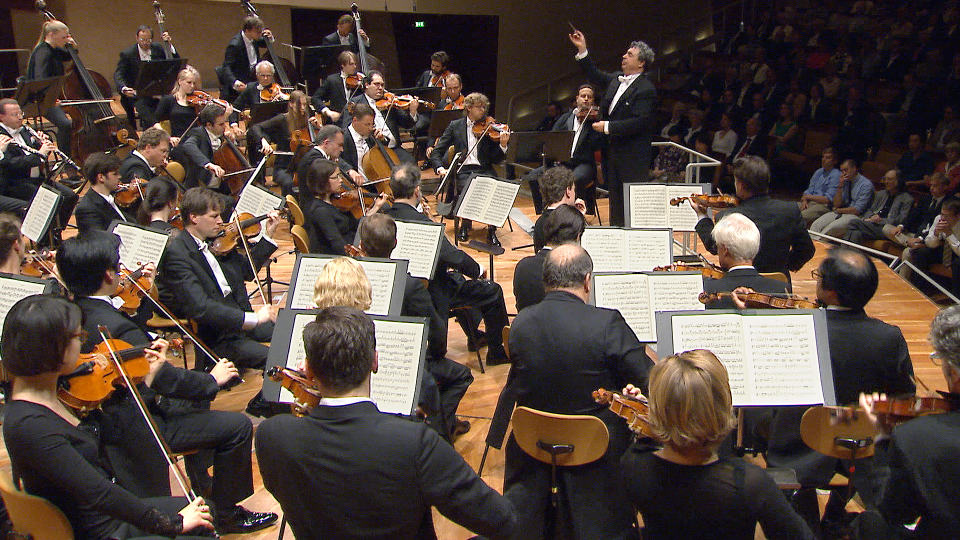 The Russian conductor Semyon Bychkov was a fan of the Berliner Philharmoniker when he was still a teenager, and even spent a night in police custody after unsuccessfully attempting to smuggle himself into a sold-out guest performance by the orchestra in St. Petersburg. Ever since he stood in at short notice for the indisposed Riccardo Muti in 1985 and – as the press noted – made a “conducting debut of considerable calibre,” he has been a regular guest of the Philharmoniker.

Philharmoniker audiences had heard Bychkov as an interpreter of the works of Richard Strauss on only one occasion, in 2008, when he conducted his Alpine Symphony. In this concert, another of the composer’s tone poems is on the programme, Don Quixote. Strauss’s work, inspired by Miguel de Cervantes’s chivalric novel of the same name, impresses with its subtle musical characterisation of the two main characters of Don Quixote and his servant Sancho Panza, and by its sound painting effects, such as the battle with the windmills and a stampeding herd of sheep. Strauss’s Don Quixote is represented by a solo cello, played here by Bruno Delepelaire, principal cellist with the Berliner Philharmoniker since 2013. Máté Szűcs, principal violist with the orchestra since 2011, gives voice to Sancho Panza.

Franz Schubert is another composer whose works Semyon Bychkov had conducted only once before in Philharmoniker concerts: his Second Symphony. In this concert he performs his <em>Great</em> C Major Symphony, which Robert Schumann described as the epitome of the Romantic symphony – because of its masterful composition, expressive melodies, finely tuned timbres and its “heavenly length.”

In April 1897 Richard Strauss noted down ideas for new works in his journal: “Symphonic poem Held und Welt Hero and World is beginning to take shape; as satyr play to accompany it – Don Quichote.” The idea that had already come to him in Florence in 1896 to compose “mad, free variations on a knightly theme” had thus grown into a double project: a serious “hero’s life” was to be paired with the Spanish hero. Strauss wrote: “Don Quixote and Heldenleben are so directly related that Don Q., in particular, is only fully and entirely comprehensible at the side of Heldenleben.” It was important to Strauss that his “heroic compositions” be regarded as counterparts, and he worked on the two symphonic poems simultaneously, although Don Quixotewas completed first.

El ingenioso hidalgo Don Quixote de la Mancha The Ingenious Gentleman Don Quixote of La Mancha by Miguel de Cervantes Saavedra (1547–1616) was published in two volumes, in 1605 and 1615, and became the best-known work of Spanish literature. In this novel the author wanted to satirize the passion of his contemporaries for chivalric romances. Don Quixote is a poor country gentleman who is literally driven out of his mind by reading these romances. We meet Don Quixote in this confused state at the beginning of Strauss’s composition. Three themes are presented: the first, knightly and gallant, in the flutes, the second, graceful and elegant, in the violins, and the third, expressive and fanciful, in the clarinet. The contrapuntal intertwining of the themes already foreshadows the wild imagination of the gaunt gentleman.

The musical account of the travels of the “knight of the mournful countenance” begins with the actual Quixote theme in the solo cello – not until Strauss has introduced Don Quixote’s earthy servant, Sancho Panza, however, with contrasting motifs in the bass clarinet, tenor tuba and solo viola. The first variation conjures up images of Don Quixote’s most celebrated adventure: his battle with the windmills. String trills imitate the sound of the wind, which sets the windmills in motion. The second variation is not lacking in onomatopoeic effects, either. Don Quixote’s “victorious struggle against the army of the great emperor Alifanfaron” turns out to be the slaughter of a passing herd of sheep; the bleating of the poor animals is heard in the muted brass. The third variation takes up a motif which plays an important role throughout Cervantes’s book: the conversation, or rather, dispute, between the constantly fantasizing knight and his unsentimental, realistic squire.

Before the meditative interlude of the fifthvariation, in which Don Quixote dreams of his beloved Dulcinea, the fourth variation recounts another of Don Quixote’s unfortunate battles, this time against a procession of penitents, whom the confused knight mistakes for a band of thieves. In the sixth variation,Sancho Panza endeavours to introduce the real Dulcinea to his master, but Don Quixote believes that she is under a wicked spell, because Dulcinea – a simple peasant girl – is ugly and unwilling to participate in Don Quixote’s fantasies.

The seventhvariation bears no resemblance to reality. Several noblewomen play a joke on Don Quixote at the court. He is supposed to drive away a menacing giant for them, and they provide him with a wooden horse that can allegedly fly. The ride through the air is exploited for onomatopoeic effects in the score with obvious enjoyment.

The eighth variation depicts the perilous journey on an “enchanted” boat, while the two concluding variations again centre around battles with chimeras. In the ninthvariation, two monks on donkeys are the targets; Don Quixote believes they are magicians who must be vanquished. In the tenthvariation, Don Quixote is challenged to a duel with the Knight of the White Moon, played by Samson Carrasco, who tries to bring the poor madman to his senses. Don Quixote is defeated again, this time for good. Strauss’s composition draws to a close and, with it, the life of Don Quixote. He returns to his village, where his strength fades away along with the visions – Don Quixote recognizes his delusions. On his deathbed, he contemplates his life. Strauss again gives the solo cello ample opportunity for lyrical reminiscences of all the themes, until the life of the legendary Don Quixote is extinguished with the last stroke of the bow.

Franz Schubert opens his Symphony No. 8 in C major, D. 944, with a horn call. Referred to as the “Great” in order to distinguish it from its companion piece in the same key (D. 589), which was composed eight years earlier, the adjective is appropriate and captures Schubert’s intentions. Years of creative crisis in symphonic terrain lay behind him as he took up work on the score in the summer of 1825. His six early symphonies no longer met his more exacting standards, and he abandoned four new symphonic attempts prematurely, although one of these fragments, the “Unfinished” in B minor, would later become his perhaps best-known work. But his goal of measuring himself against Ludwig van Beethoven, the powerful titan of symphonic music, and holding his own next to him – Schubert did not believe he had achieved that until the “Great” Symphony in C major. He dedicated the work to the Vienna Gesellschaft der Musikfreunde Society of Music Lovers, which began rehearsing it in 1827 – with the devastating result that a performance of the symphony was not possible “because of its length and difficulty”. Schubert’s dream had burst like a soap bubble. His most important work was not performed during his lifetime.

It was not until Robert Schumann paid a visit to Schubert’s brother Ferdinand in January 1839 that the work’s fortunes changed. Ferdinand showed Schumann the unpublished scores of his composer colleague, who had died eleven years earlier, and Schumann was astonished to see how many undiscovered treasures still awaited the music world. He sent the C major Symphony, which he found among the bundles of manuscripts, to Felix Mendelssohn, who conducted the premiere of the work in Leipzig on 21 March 1839. Schumann, who heard the second performance of the symphony in December of the same year, could not stop raving about it: “All the instruments are human voices, and ingenious beyond measure, and this instrumentation in spite of Beethoven – and this length, this heavenly length, like a novel in four volumes, longer than the Ninth Symphony,” he wrote to his fiancée, Clara Wieck.

It is already clear in the first movement that Schubert went far beyond the formal dimensions and style of his previously completed symphonies in the Eighth Symphony. With its three distinctly separate themes, which collide during the brief development section and lead to the climax, it is revolutionary. Nevertheless, Schubert’s symphony, unlike those of Beethoven, is less dramatic than epic. In the second movement, two worlds confront each other, resulting in the breakdown of the first. The song of the cellos introduced afterwards is one of the most moving and sensitive melodies in the entire literature. The scherzo, with its high-spirited, elegant contrapuntal writing, is juxtaposed with a melodic, broadly flowing trio. The finale is also characterized by two contrasting themes. The return modulation after the solemn contrapuntal climax extends from the development section to the restatement of the first theme to the reprise of the enchanting second theme, giving the final return of the principal theme in the coda, now in the home key of C major, an incredibly fresh yet concluding effect.

Semyon Bychkov, born in Leningrad, was a pupil of Ilya Musin at the Leningrad Conservatoire. In 1973, he won First Prize at the Rachmaninov Conducting Competition. Since leaving Russia in 1975 and moving to the USA, he has enjoyed a career taking him from New York’s Mannes College of Music to engagements for international opera productions (eg. in Milano, Hamburg, Paris, Vienna, London, Chicago, New York, at the Salzburg Festival and Maggio Musicale in Florence), as well as concerts with some of the greatest orchestras in the world. Bychkov was appointed Music Director of the Orchestre de Paris (1989–98), Principal Guest Conductor of the St Petersburg Philharmonic (1990–94) and of Maggio Musicale in Florence (1992–98). From the season 1997/98 until 2010, he was Chief Conductor of the WDR Sinfonieorchesters Köln, a position he also held at the Dresden Semperoper from 1998 to 2003. Since his debut with the Berliner Philharmoniker in 1985, stepping in for Riccardo Muti at short notice, Semyon Bychkov has returned several times for guest conducting engagements. His most recent visit was in January 2014, when he conducted Mozart’s Piano Concerto in G major K. 453 and Shostakovich’s Symphony No. 11. His recording of Shostakovich’s Symphony No. 5 with the Berliner Philharmoniker was the winner of the Belgian Caecilia Award and StereoReview’s “Record of the Year”.

Beethoven and Bruckner with Christian Thielemann and Rudolf Buchbinder