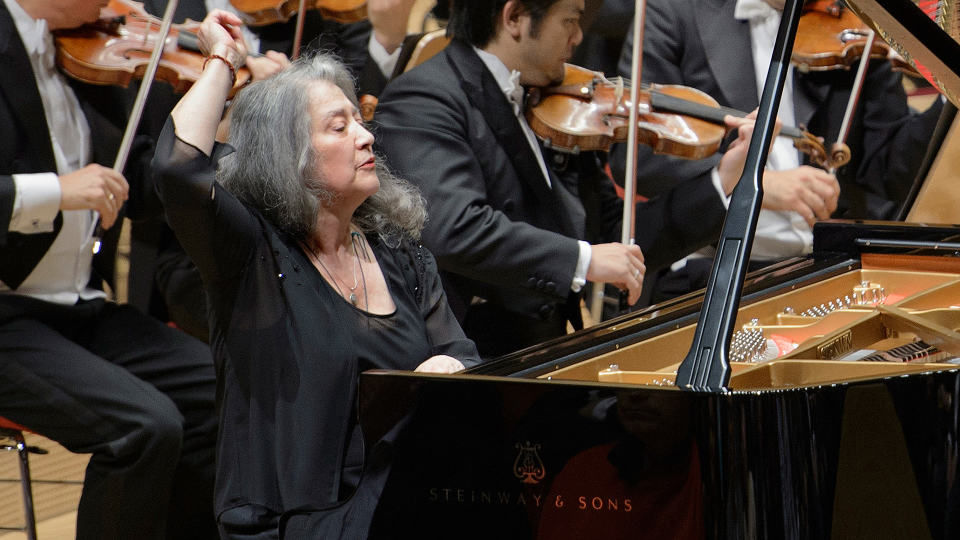 Martha Argerich and Riccardo Chailly have been linked with the Berliner Philharmoniker by long artistic friendships. For them to perform at the orchestra’s concerts jointly, however, is something of a rarity. Only twice, namely in 1983 and 1989, did Berlin audiences have the opportunity to experience the two of them on stage. On both occasions they performed Sergei Prokofiev’s Third Piano Concerto, in which they – as the press wrote – “made music in one spirit”. For this concert, they chose Robert Schumann’s Piano Concerto in A minor. This work constitutes an alternative to the brilliant virtuoso concerti popular at the time. With it, the composer tried to bring about “something between a symphony, concerto and large sonata”. Thus he created something completely new for the time: a concerto in which piano and orchestra coalesce into one indivisible unity.

The evening begins with the overture that Felix Mendelssohn composed in 1839 for the Leipzig premiere of Victor Hugo’s play Ruy Blas. Though Mendelssohn found the play “abominable” and “disgraceful”, he created rousing music full of poetry. The third piece on the programme is Sergei Rachmaninov’s Third Symphony, considered the most radical and modern of his three symphonies. In earlier concerts with the Philharmoniker, the Italian Riccardo Chailly has time and again shown himself to be a specialist in the Russian repertoire. This is the first time he conducted one of Rachmaninov’s symphonic works with the Berliner Philharmoniker.

One Hundred Years of Romanticism

As music director at Leipzig’s Gewandhaus Felix Mendelssohn was not only interested in high art. Almost touchingly, he also worried about the financial situation of his orchestra musicians and, for example, negotiated the payment of a 500-thaler bonus for them. Thus, it was only natural for him to agree to a request from the Theatrical Pension Fund: Victor Hugo’s latest drama, Ruy Blas, was to be presented as a benefit performance for the pension fund on 11 March 1839, and the Leipzig directors had asked Mendelssohn to compose an overture and a romance for the production. After reading Hugo’s tragedy about love and revenge, however, Mendelssohn changed his mind. He found this “odious play ... detestable and utterly beneath contempt” and suddenly told the pension fund that he did not have enough time to write an overture and only composed the romance for the time being. When the fund trustees assured him that they wanted to allow him more time and would complete the project the following year, Mendelssohn’s competitive spirit was aroused. He composed the requested overture within three days – and later declared that the work had “greatly amused” him. His opinion of Hugo’s play did not change, however. Ten days after its premiere, Mendelssohn included the rousing instrumental overture to a prototypical dramatic work on the programme of a Gewandhaus concert – under the prosaically neutral title Overture to the Theatrical Pension Fund.

Franz Schubert’s “Great” C major Symphony had its premiere during the same Leipzig concert on 21 March 1839 at which Mendelssohn presented his Overture to the Theatrical Pension Fund. Robert Schumann had come across the work among the composer’s unpublished scores only a few weeks earlier in Vienna, and this discovery was a turning point for him. Schubert’s last symphony provided Schumann with the hoped-for proof that even after the “titan” Beethoven, outstanding and important symphonies could still be composed. It inspired him to try his hand at a work in this genre himself in January 1841 – his “Spring” Symphony, which met with an enthusiastic response from the audience and critics. It seems only logical that, after this success, Schumann immediately devoted himself to the next genre with a long-established tradition. On 4 May 1841 he started composing a fantasy for piano and orchestra, attempting to reinterpret the tradition of the instrumental concerto.

Schumann experimented with free form in the Phantasie for Piano and Orchestra, a one-movement piano concerto in miniature. He transformed the customary three movements into three sections with different tempos. Although the orchestral writing followed symphonic style, the orchestra entered into such a close dialogue with the solo part that neither could exist without the other. “The piano is interwoven with the orchestra in the most skilful fashion,” Schumann’s wife Clara, the acclaimed pianist, marvelled after a run-through rehearsal with the Gewandhaus Orchestra in August 1841, “one can’t imagine the one without the other”. After the rehearsal, however, Schumann decided to set the Phantasie aside temporarily. Not until the summer of 1845 did he take up the score again and, with two additional movements, expanded it into a traditional piano concerto, his op. 54 in A minor. Despite its disjointed history, the work is a unified whole. That is not surprising, since in the lyrical, delicate Intermezzo and the bravura, rhythmically sophisticated finale Schumann draws on motivic elements and, in particular, the main theme of the Phantasie, which became the first movement. It is no accident that Schumann quotes from a composition by his wife in this theme – the Nocturne op. 6 no. 2 – since the Piano Concerto was intended primarily for her appearances. Her playing also provided a model for the versatile artistry demanded of pianists in this work. They need poetry in order to express its subtle thoughts and eccentric ideas, but they must also have the necessary “paws”, so that they are not swallowed up by the symphonic proportions of the orchestral writing. In addition, they must maintain an overall perspective, because the music constantly plays unexpected tricks and changes its character. Naturally, a good dose of humour is also called for, since there is something childlike and impish about Schumann’s Piano Concerto; it is characterized by joy in playing for its own sake.

Exile and the End of Time: Sergei Rachmaninov’s Third Symphony

“Composing is as essential a part of my being as breathing or eating.” That is how Sergei Rachmaninov described the importance of his creative output in his last interview, which he gave to an American magazine in 1941. One would think that a musician who says something like that about himself must have left behind a huge oeuvre, but the opposite is true. The catalogue of Rachmaninov’s works comprises only 45 opus numbers, and he composed no more than six works during the last 25 years of his life.

There were biographical reasons for the meagre results of his later years. After the October Revolution, Rachmaninov was forced to leave his Russian homeland and emigrate to the West. He wanted to maintain his high standard of living abroad as well, however, and he could only earn the necessary income with appearances as a celebrated piano virtuoso. From that time onwards, his life seemed like a never-ending concert tour. Despite the fame he soon achieved in the West, Rachmaninov could not come to terms with the loss of his country estate, Ivanovka, where he had spent the summers and had the leisure time to compose. He did not find a replacement until he travelled to Switzerland in 1930 and was so captivated by the area around Lake Lucerne that he had a spacious villa built there, in the latest style and with all the modern conveniences. Here he drew the necessary inspiration to compose his Third Symphony in A minor, op. 44, during the summer months of 1935 and 1936.

The three-movement symphony reveals how attached Rachmaninov still was to his homeland. Its often melancholy themes and motifs are unmistakably influenced by Russian melodies. The same is true of the archaic theme with which the work begins and which also opens the middle movement, now played in expanded form by the solo horn and accompanied by arpeggiated harp chords. The intensified rhythmic energy of the middle section of the movement – a grotesque dance that conjures up bizarre, garish, fantastic images – demonstrates that in this Adagio ma non troppo Rachmaninov already anticipates his last work, the Symphonic Dances, op. 45. The quotation from the medieval Dies irae (Day of Wrath) in the finale also seems to be a harbinger of Rachmaninov’s last work.

Although the self-critical Rachmaninov was for once convinced “that this is a good work”, he had to put up with the criticism that his Third Symphony sounded sterile, was insignificant and “provocatively melancholy”. How different were the words of the British conductor Sir Henry Wood, who predicted that this composition “being of the true Russian Romantic school” would “prove as popular as Tchaikovsky’s Fifth”. It has not quite come to that yet, but an encounter with Rachmaninov’s last symphony is certainly worthwhile.

Martha Argerich, born in Argentina, performed in public for the first time when she was five years old. In 1955, she moved with her family to Europe where she studied under Friedrich Gulda and Nikita Magaloff, among others. At the age of 16, the pianist won the competitions in Bolzano and Geneva; after concerts in London, western Europe and Poland, she won first prize at the International Fryderyk Chopin Piano Competition and the Polish Radio prize in 1965. Martha Argerichʼs repertoire spans from the music of Bach and Beethoven and the great pianists of the 19th century (Schumann, Chopin, Liszt, Tchaikovsky), to the works of Ravel, Debussy and eastern European modern classics such as Bartók, Prokofiev and Shostakovich. In addition to her appearances as a soloist with all the international top orchestras, she has devoted herself with special love to chamber music, especially with the violinist Gidon Kremer, cellist Mischa Maisky and in piano duos with Nelson Freire and Alexander Rabinovich. Martha Argerich has been artistic director of the festival in Beppu (Japan) since 1998. The following year, she founded the Martha Argerich International Piano Competition in Buenos Aires and in 2002, the Progetto Martha Argerich in Lugano. Her most prestigious awards include the French order of Commandeur de lʼOrdre des Arts et des Lettres (2004) and the Praemium Imperiale of the Japan Art Association (2005). Martha Argerich has appeared on many occasions in Berliner Philharmoniker concerts since her debut in1968, most recently with the Piano Concerto by Maurice Ravel in May 2007. In addition, she played works by Mozart, Schumann and Schubert with members of the Berliner Philharmoniker at a charity concert in aid of reconstruction in Fukushima in May 2011.

Riccardo Chailly, born in 1953, studied at the conservatories in Perugia, Rome and Milan, and attended master classes with Franco Ferrara in Siena. At the age of 20, he became assistant to Claudio Abbado at La Scala in Milan. After his debut at the Royal Opera House Covent Garden in London 1979, commitments followed with internationally renowned companies such as the Vienna State Opera, the Metropolitan Opera in New York, the Bavarian State Opera and Zurich Opera. Riccardo Chailly also gave concerts with the world’s leading orchestras and performed at the Salzburg Easter Festival and the Lucerne Festival. From 1982 to 1989 he was chief conductor of the Radio-Symphonie-Orchester Berlin (now the Deutsches Symphonie-Orchester Berlin), and from 1982 to 1985, he was principal guest conductor of the London Philharmonic Orchestra. In the period from 1986 to 1993 Riccardo Chailly, who has received many international awards, was music director of the Teatro Comunale Bologna. For 16 years, from 1988 to 2004, he headed the Royal Concertgebouw Orchestra in Amsterdam, and also conducted the Orchestra Sinfonica di Milano Giuseppe Verdi (1999 – 2005) before taking up office as the 19th Gewandhauskapellmeister in Leipzig in September 2005. He has conducted the Berliner Philharmoniker on many occasions since his debut in 1980, most recently in November 2013, with a programme which included works by Richard Wagner and Frnaz Liszt.

“Fellini, Jazz & Co.” with Riccardo Chailly at the Waldbühne