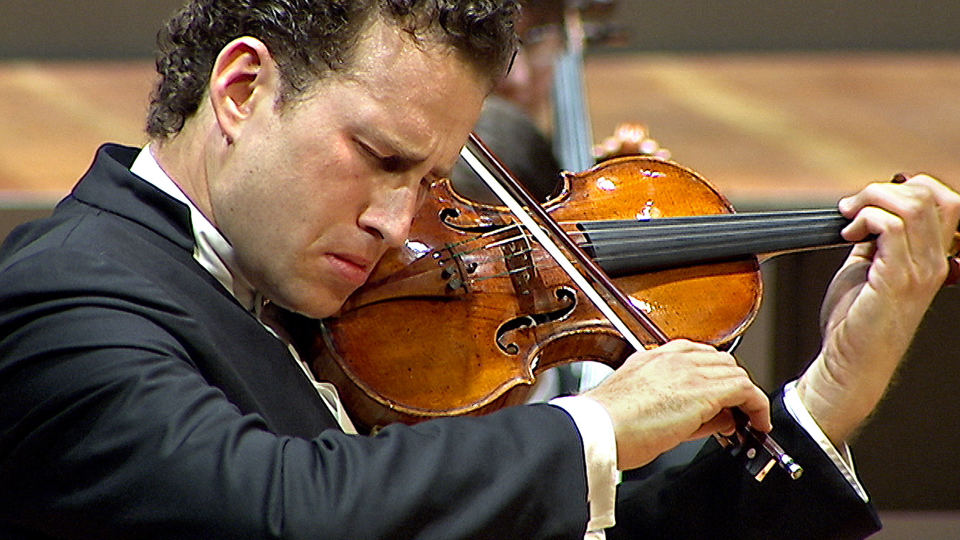 “A violinist of real substance,” was how Gramophone magazine described Nikolaj Znaider – a musician “who is not afraid to go his own way and say something different. There is an ardour to his playing that makes a refreshing change from the ‘safe’ performances delivered by some young virtuosos”. In this recording, Znaider makes a guest appearance with the Berliner Philharmoniker with the Violin Concerto by Jean Sibelius. He plays on his precious violin: the legendary “Guarneri del Gesù” once owned by Fritz Kreisler.

This concert also sees the debut of the young Slovak conductor Juraj Valcuha who made several more debuts during the 2011/2012 season, including with the Concertgebouw Orchestra in Amsterdam, the Boston Symphony Orchestra and the New York Philharmonic. In addition to Sibelius’s Violin Concerto, the musicians also perform Piotr Ilyich Tchaikovsky’s First Symphony and Carl Maria von Weber’s Overture to the opera Euryanthe: two works that are not often heard in the concert hall, although they are both prime examples of the verve and colour we associate with Romantic music.

Jean Sibelius still breathed life into Romanticism well into the 20th century, when his fellow composers had long since started looking for new sound worlds. His Violin Concerto also captivates with its dark colouration, folk flavour and impressive virtuosity. Perhaps the reason why the concerto conveys more than mere surface gloss is the fact that Sibelius was an excellent violinist himself, and knew how to elicit the finest nuances of expression from the instrument.

Euryanthe had been commissioned by the Kärntnertortheater in Vienna. Weber invited the eccentric Dresden poetess Helmina von Chézy to help him on the libretto, and together they adapted a 13th-century French romance as the basis of their opera about the true-hearted Euryanthe, whose love for Adolar is put to the severest possible test by the intrigues of Lysiart and Eglantine.

Weber’s opera proved remarkably successful not only at its first performance in Vienna on 25 October 1823 but in many other towns and cities, too. In Berlin, the opera was a triumph when first staged there in 1825. Later productions adopted an increasingly interventionist approach to the work, altering its structure and, as a result of well-meaning cuts, disfiguring it. It now shares the fate of most of Weber’s operas, which have disappeared from the repertory, while their overtures have become popular as concert pieces.

The Euryanthe Overture constitutes a summation of the opera’s contents and atmosphere, immediately casting its spell on its audience and drawing them into a world of courtly splendour, medieval chivalry and mysticism. The Overture begins in a heroic E flat major and develops the central motif from the opera, Adolar’s “Ich bau’ auf Gott und meine Euryanth’”, together with a theme from his Romance No. 2, which functions as a lyrical counterpart to the earlier motif. Particularly impressive is the eerie intermezzo, a passage imaginatively instrumented for only eight violins. There follows an archaizing fugato that develops the opening themes. The Overture ends with a recapitulation and an apotheosis of the theme of the Romance now radiantly scored for full orchestra.

Not many people remember that Jean Sibelius was an accomplished violinist and originally intended to make his career as an orchestral musician. He decided to become a composer after auditioning for the Vienna Philharmonic in January 1891: while his playing was termed “not at all bad”, he was nevertheless advised to pursue his compositional studies. Whether it was the disappointment of abandoning his performing career or his reverence for the more famous masters, Sibelius hesitated for a long time before responding to a suggestion of violinist Willy Burmeister’s and undertaking the composition of his Violin Concerto in D minor Op. 47. Completed in its final form in 1905, it would remain his sole contribution to the genre.

Playing a far greater role than external circumstances in its protracted genesis, however, was the formal solution that Sibelius sought for this work. He himself considered it unrepeatable and unsurpassable, which is another way of saying that this music flies in the face of traditional expectations. The opening movement does not follow principles of sonata form nor does the work’s style further pursue the “Nordic tone” that was linked with the name Sibelius since Lemminkäinen and Finlandia. In any event, the soloist is delegated the lion’s share of the work. The violin immediately takes the lead in the introductory Allegro moderato; it already presents its first cadenza before the initial thematic exposition; it answers the subsidiary theme (introduced by the orchestra) with self-contained variations; and it takes over large chunks of the development. Following another virtuosically heightened stretto, the solo part in the second movement leads its orchestral companions – first the chorus of horns, then strings and woodwind – into a more introspective world of feeling and atmosphere.

Then, without any warning, the ecstatically exuberant finale breaks in. Sibelius himself is said to have referred to it as a danse macabre, but the famous English critic D.F. Tovey called it a “polonaise for polar bears”. With all due respect, no polar bear has ever danced with such joyous intoxication. Moreover, the composer injects such varied ideas into the music that he has not the least trouble avoiding what this movement might have become: an empty perpetuum mobile. In fact, this finale constantly reinforces the whole work’s compelling impression. No wonder that after 100 years it is still one of the most often performed works in its genre!

But its paths to success was anything but predictable. Sibelius’s Violin Concerto was a fiasco at its premiere in Helsinki on 8 February 1904. The violinist Viktor Nováček was not up to the demands of the solo part, which probably accounted for the orchestra, under the composer’s direction, also not being on good form. It took first-class soloists like Jascha Heifetz and David Oistrakh, beginning in the 1930s, to help Sibelius’s concerto find its rightful place in the repertoire.

Tchaikovsky’s decision to become a musician occurred relatively late. He was already 22 and had completed his studies in jurisprudence when he enrolled in a music theory course at the conservatory in St. Petersburg, newly founded by Anton Rubinstein. Although aware of his exceptional gifts, he was still plagued by doubts as to whether he could succeed as a composer. When Rubinstein advised him to devote himself entirely to music, Tchaikovsky resigned his post as a clerk in the Ministry of Justice. After three years of intensive training, he graduated from the conservatory in September 1865. Soon after, Rubinstein’s younger brother Nikolai engaged him as a theory teacher in Moscow and in March 1866 he conducted Tchaikovsky’s Overture in F major. That performance’s success encouraged the young composer to undertake his Symphony No. 1 in G minor Op. 13, on which he laboured day and night through the summer, to the point of nervous and physical exhaustion.

Hoping for a performance of the work during the next season at the Russian Musical Society, Tchaikovsky showed the still unfinished score to Anton Rubinstein, who criticized it severely. After a series of alterations and revisions, trial performances of the scherzo and then the two middle movements in St. Petersburg in 1867 under Anton Rubinstein, in February 1868 his brother Nikolai finally conducted the premiere of the entire symphony in Moscow. In his memoirs, Tchaikovsky’s champion Nikolai Kashkin, a Moscow Conservatory professor, describes the audience’s enthusiastic reception and, at the post-concert celebration, the overjoyed composer “kissing everyone present again and again and then smashing all the glasses”.

No less typically Russian than his reaction to this triumph is Tchaikovsky’s use of Russian folksong, especially in the introduction to the final movement, and the programmatic titles of the first two movements: “Dreams of a Winter Journey” and “Land of Desolation, Land of Mists” evoke a sleigh-ride through the snowy Russian landscape, whose vast dimensions and beauties are captured by the composer’s wonderful sensibility for musical atmosphere. Unmistakably Tchaikovskian is the inventive scoring of the Adagio cantabile: with simple mastery he juxtaposes the yearning oboe melody with a countermelody, first on flute, then in the other woodwind. In addition to the atmospheric Russian colouring of the lyrical themes and motifs, the orchestral sonorities are also clearly marked by the German Classical-Romantic symphonic tradition. The gyrating dance of the Scherzo’s main section strongly recalls a composer he much admired – Schumann – while the waltz-like Trio and its lovely melody are purest Tchaikovsky. Following a slow, gloomy introduction, the powerful and affirmative Finale is dominated less by rich thematic invention than by the principle of climactic build-ups, here perhaps overused for sheer effect.

Even though, looking back, the composer found certain aspects of the symphony clearly immature, it remained among his favourite works. In 1883 he confessed to his friend Konstantin Albrecht: “For all its glaring deficiencies, I still have a soft spot for it, a sin of my sweet youth.”

Juraj Valcuha, a native Slovak, has been chief conductor of the Orchestra Sinfonica Nazionale della RAI Turin since November 2009. He studied composition and conducting in Bratislava, in St Petersburg with Ilya Musin, and in Paris, where he moved in 1998. In 2005 he made his debut with the Orchestre National de France. The following season, he conducted Puccini’s La Bohème in Paris and Bologna, and Bartók’s Bluebeard’s Castle in Lyon. Since then, Juraj Valcuha has conducted many renowned orchestras, including the Oslo Philharmonic, the Pittsburgh Symphony Orchestra, the Gewandhaus Orchestra in Leipzig and the Swedish Radio Symphony Orchestra. Juraj Valcuha opened the season of the Munich Philharmonic Orchestra in summer 2009, and also conducted the orchestra at a guest performance in Baden-Baden. He has made debuts with the Staatskapelle Dresden and the National Symphony Orchestra in Washington and has conducted London’s Philharmonia Orchestra and the Pittsburgh Symphony Orchestra. Last season he conducted, among others, a new production of La Bohème at the Teatro La Fenice in Venice and made a guest appearance with the Orchestra Sinfonica Nazionale della RAI with Yo-Yo Ma as soloist at the Abu Dhabi Classics. With these concerts, Juraj Valcuha makes his debut with the Berliner Philharmoniker.

Nikolaj Znaider, one of the leading violinists of our time, enjoys equal success as a soloist, chamber musician and conductor. A guest of major orchestras throughout the world, he has worked together with conductors such as Daniel Barenboim, Sir Colin Davis, Gustavo Dudamel, Mariss Jansons, Lorin Maazel and Christian Thielemann. His appearances as a solo performer and as a chamber musician have taken him to the world’s major concert halls. In the 2008/2009 season, the London Symphony Orchestra dedicated an “Artist Portrait” to him, which included three orchestral concerts and a chamber music evening. This season, as “Capell-Virtuos” of the Staatskapelle Dresden, Nikolaj Znaider can be heard as soloist, conductor and chamber musician with the orchestra and its members. Since the autumn of 2010, the artist has been principal guest conductor of the Mariinsky Theatre Symphony Orchestra in St Petersburg. Furthermore, he has been invited to conduct, among others, the Munich Philharmonic, the Royal Concertgebouw Orchestra, the Czech Philharmonic Orchestra, the Russian National Orchestra and the Los Angeles Philharmonic Orchestra. Nikolaj Znaider made his debut with the Berliner Philharmoniker in mid-February 2000 as the soloist in Carl Nielsen’s Violin Concerto Op. 33, conducted by Paavo Järvi. He plays on the so-called Kreisler violin by Giuseppe Guarneri “del Gesù” from 1741, on extended loan from the Royal Danish Theatre, supported by the Velux Foundations and the Knud Højgaard Foundation.

A Beethoven evening with Nikolaus Harnoncourt

Beethoven’s Piano Concerto No. 1 with Mitsuko Uchida and Simon Rattle

Concert with Mariss Jansons and Hilary Hahn from Suntory Hall