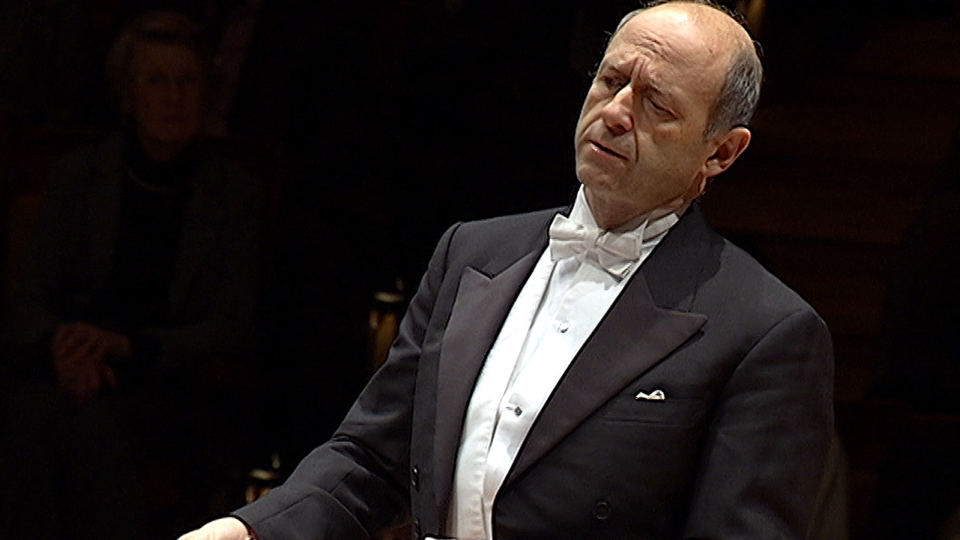 When Iván Fischer conducts the Berliner Philharmoniker, he regularly brings musical gems from his native Hungary. Audiences are then usually surprised: Why have we never heard this wonderful music before? This reaction is also likely with this recording with Ernő Dohnányi’s Symphonic Minutes and Jenő Hubay’s Violin Concerto No. 3. From the core Classical and Romantic repertoire, the Fifth Symphony by Franz Schubert is also to be heard.

Ernő Dohnányi’s Symphonic Minutes from 1933 and Jenő Hubay’s Violin Concerto No. 3, completed in 1907, perfectly embody the fire and longing that we associate with Hungarian music, while at the same time remaining original and surprising. Their roots lie unmistakably in the 19th century and especially in the music of Johannes Brahms. The soloist in Hubay’s concerto is Daniel Stabrawa, who has been a member of the Berliner Philharmoniker since 1983 and was appointed 1st concertmaster of the orchestra three years later.

In Schubert’s Fifth Symphony, there is also a relationship to an older model: in this case, Wolfgang Amadeus Mozart. Just a few weeks before composing the symphony, the 19-year-old Schubert praised the “magical sounds of Mozart’s music” in his diary. In his Fifth Symphony, echoes of Mozart’s G minor Symphony No. 40 can be heard in particular: in the floating opening, in the theme of the scherzo, and in the crystalline lightness of the orchestral writing.

Greatness without Stress or Strain

Neo-classicism from Budapest and Vienna

The title is a contradiction in terms: Symphonic Minutes – what could that mean? Something monumental compressed into a small format? A collection of bagatelles clad in a richly pleated garment? Clearly, Ernő Dohnányi was trying to distance himself from the traditional symphony. Ever since E.T.A. Hoffmann’s proclamation to that effect, the genre had been regarded as the “height of instrumental music”, as “opera for instruments”. It was the medium par excellence for humanist messages and ambitious architectonic designs. Adorno’s characterization of the Beethoven symphonies as “public addresses to humanity” suggests the immense demands they had made on generations of composers, resulting either in supreme achievements or in total creative paralysis.

Associated with the German music tradition

Dohnányi was born in 1877 in Pozsony (then in Hungary, now Bratislava, Slovakia) but was associated with the German music tradition. Before World War I, for a number of years, he was professor at the Berlin Musikhochschule. In 1933, the year he composed Symphonic Minutes, he must have realized how laboriously his erstwhile model Johannes Brahms had struggled for years to write a symphony. The title of Dohnányi’s work speaks volumes: this principal conductor who built up his Budapest Philharmonic into one of Europe’s top ensembles did not write a large symphony for his musicians but rather a succinct neo-classical showpiece for their outstanding individual and collective qualities. Liberated from the expressive excesses of late Romanticism, Dohnányi in his Minutes presents a series of highly varied characteristic pieces, an assortment of styles and moods.

The opening “Capriccio” scurries past like a disembodied fairy scherzo. Woodwind chasing up and down, repeatedly seeming to break out in collective sniggering, confront elegiac string lyricism. Next comes a bucolic genre painting: the cor anglais (English horn) intones a melancholy “Rhapsodia”, whose melody is taken up by the other solo winds, culminating in a brief climax in radiant C major. In the middle of the five-movement structure is a witty scherzo in which the trombones cite a peasant dance in shifting metres. Another slow movement follows, this time a simple Tema con variazioni, on a modal 17th-century melody. The work concludes with a wild csárdás, a perpetuum mobile made up of whirring string runs and syncopated wind rhythms.

Jenő Hubay played a key role in Budapest’s musical culture from the end of the 19th century. Whereas Dohnányi outside of Hungary always called himself by his German name Ernst von Dohnányi, the violinist Jenő (Eugen) Huber, born in Pest in 1858, adopted the Magyar-sounding version of his name at the age of 21. In the 1870s Hubay was a pupil of Liszt for several years. He also studied in Berlin with Joseph Joachim and later in Paris with the Belgian violinist-composer Henri Vieuxtemps, who recommended Hubay as head of violin studies at the Brussels Conservatory when he was only 23. Four years later, in 1886, he returned to Budapest and succeeded his father in the same position at the Budapest Music Academy. He was director of that institution from 1919 to 1934.

It is hardly remembered today that, along with some 200 pieces for violin, Hubay also wrote orchestral works and operas. Of his four contributions to the genre, only his Violin Concerto No. 3 in G minor Op. 99, composed in 1906-07, found a place in the repertoire. Largely eschewing folk material, Hubay composed in a formally ambitious, international style. The concerto’s four movements, joined without a break, betray the influence of both Liszt and Vieuxtemps.

Like his Belgian teacher, Hubay strove for pathos, grandeur and gravity, which accounts for the rather generalized character exhibited by some of his themes. In compensation, this enables him to integrate his technical craft, motivic development and tasteful passagework so seamlessly that the compositional content hardly suffers in the virtuosic passages. Instead of a fully formed sonata movement, the work begins with a concise Introduction quasi Fantasia, followed by a sparkling scherzo that plays a cheeky game with alternating triple and quadruple metre. Extending to nearly ten minutes, the essentially tragic Adagio is a solo song over Baroque dotted rhythms in the orchestra, occasionally recalling the Violin Concerto of Brahms. The restlessly driving finale opens with a fugato and midway through features a long cadenza that brings back the themes of the work to interact once more.

Franz Schubert came into contact with Hungarian music at an early age, but it began leaving its traces in his work only after two extended stays (in 1818 and 1824) at Zseliz (today Želiezovce, Slovakia, then still in Hungary), where he served as tutor to the young countesses Esterházy. The provenance of the local colour in Schubert’s music is not always readily identifiable but rather seems to conjure up an imaginary homeland. This can be observed even in relatively simple examples. The 5 German Dances and 7 Trios with Coda for string orchestra D90 are among the wide-ranging dance music that Schubert produced quickly and effortlessly for daily use. They were written in November 1813, just after the 16-year-old had left school. One can already hear how Schubert could take the most ordinary form – essentially a forerunner of the Viennese waltz – and by means of tonal nuances and melancholy harmonic shadings move it in the direction of elaborate chamber music.

Between 1813 and 1816, Schubert committed to paper no fewer than six symphonies, filled with imaginative genius and with a buoyancy “that could hardly have been more youthfully carefree and that he later would lose”, as the German musicologist Wolfram Steinbeck has remarked. All of them were first performed in public only after Schubert’s death, as they were all intended for a private orchestra of some 40 musicians who assembled in large homes and played for invited listeners, friends and relations. Along with individual professionals, paid for their services, this orchestra was made up of ambitious amateurs who, however, must have possessed a remarkable technical command.

Music in the best sense

The forces available were apparently subject to fluctuation. Schubert’s Fifth Symphony, dating from early autumn 1816 and the most often performed of the early six, calls for only a single flute and no clarinets, trumpets or timpani. The modest scoring results in Schubert’s dispensing with any sort of extravagant display in favour of a smaller-scaled layout, a particularly melodic character and a light, serene tone. Instead of a slow introduction, he precedes the main theme of the opening movement with a highly original four-bar opening gesture. At the beginning of the development section he combines it with material from the closing group and sends it off on an extraordinary modulatory journey via D flat major and G flat major to E flat minor. Schubert leads the beautiful E flat major Andante con moto on to similarly shaky ground when, in the first of the two contrasting sections, the intimate song of the woodwind and first violins slips into remote F flat major and C flat major on its way to B minor. The G minor Minuet is straightforward and compact, while the sonata-form finale represents light, untroubled music in the best sense.

Iván Fischer is founder and Music Director of the Budapest Festival Orchestra. Born in Hungary, Fischer studied piano, violin, cello and composition in Budapest, continuing his education in Vienna where he was in Hans Swarowsky’s conducting class. He also studied intensively early music and was for two years Nikolaus Harnoncourt’s assistant. His international career took off in 1976, when he won the Rupert Foundation conducting competition in London. Fischer has been a regular guest in major opera houses of the world and was Music Director of Kent Opera and Lyon Opera, and principal conductor of the National Symphony Orchestra of Washington D.C. As a guest conductor he works with the finest symphony orchestras of the world, like the Royal Concertgebouw Orchestra, the New York Philharmonic and the Cleveland Orchestra, the Orchestre de Paris, the Munich and Israel Philharmonic. In 1989 he gave his debut with the Berliner Philharmoniker and has returned several times since; his last performance with the orchestra was in October 2009 when he conducted works by Haydn, Bartók. Liszt, Brahms and Kodály. From the 2012-2013 season, he will be Music Director of the Konzerthaus Berlin and principal conductor of the Konzerthausorchester Berlin. Fischer has also been active as a composer: his works have been performed in the Netherlands, Hungary, Germany and Austria. He is a founder of the Hungarian Mahler Society and patron of the British Kodály Academy. Iván Fischer received the Golden Medal Award from the President of the Republic of Hungary, and the Crystal Award from the World Economic Forum for his services to help international cultural relations. The French Government named him Chevalier des Arts et des Lettres. In 2006 he was honoured with the Kossuth Prize, Hungary’s most prestigious arts award.

Daniel Stabrawa was born in Kraków (Cracow), where he also studied the violin at the music academy with Zbigniew Szlezer. After winning numerous international competitions, he became leader of the Kraków Radio Orchestra in 1979. He has been a member of the Berliner Philharmoniker since 1983 and one of its three leaders since 1986. From 1986 to 2000 he taught in the Philharmonic’s Orchestra Academy. In 1985 he and three of his colleagues formed the Philharmonia Quartet, which has appeared to tremendous acclaim not only in Berlin but also in other international centres of music and has received a large number of awards. Since 1994 Daniel Stabrawa has turned increasingly to conducting and from 1995 to 2001 was principal conductor of the Capella Bydgostiensis in Bydgoszcz (Bromberg). He is also active as a soloist: in June 2010 he performed Beethoven’s Triple Concerto in C major together with his philharmonic colleague Ludwig Quandt (cello) and pianist Martin Helmchen, in a concert with the Berliner Philharmoniker conducted by Herbert Blomstedt.

Peter Eötvös conducts the premiere of his Cello Concerto Grosso