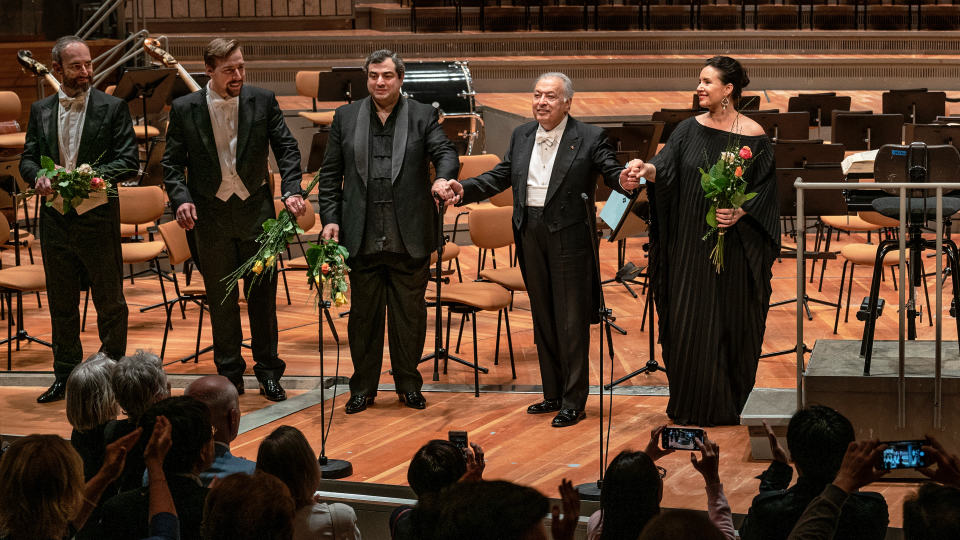 Giuseppe Verdi’s Shakespeare opera Otello, premiered at La Scala in Milan in 1887, starts with an unparalleled musical bang: when the curtain rises, a storm depicted by the most sophisticated instrumental and vocal means rages off the coast of Cyprus – and already hints at the deadly passions that are ignited in the course of the drama. Sixteen years had passed since the premiere of Aida, which was composed for the opening of the Suez Canal, when Verdi once again returned to composing operas with Otello. Devastating criticism had meant that Verdi – apart from revisions of Simon Boccanegra and Don Carlos – no longer wanted to compose other stage works. “I would just hear again that I was not able to write and was a follower of Wagner,” the composer explained in a letter in 1878: “A fine result! After almost 40 years of musicianship, to end up as an imitator.” Only after the publisher Giulio Ricordi proposed a collaboration with the writer and composer Arrigo Boito did Verdi consider a new opera project. Seven years of intensive work together was to pass between Boito’s first sketch for Otello and Verdi’s completion of the compositional work.

Verdi ultimately decided against the original idea of naming their joint work “Iago” after the sinister villain of Shakespeare’s play: “He is (it is true) the demon who moves everything,” argued the composer, “but Otello is the one who acts. He loves, is jealous, kills and kills himself.” It is undoubtedly also thanks to his librettist that Verdi was able to open a new chapter in the history of Italian opera with Otello, for Boito, with a text that broke away from the traditions of Italian librettistics of that time, first created the possibilities for Verdi’s musically innovative setting of the Shakespearean jealousy drama.

A few days after staged performances at the Easter Festival in Baden-Baden, the Berliner Philharmoniker, conducted by Zubin Mehta, present two concert performances of Verdi’s late work at the Philharmonie with the conductor and a top-class ensemble of singers. The choral role, which ranges from the stormy beginning of the opera to lyrical passages, is taken by the Rundfunkchor Berlin, an established musical partner of the Berliner Philharmoniker.

A Stroke of Luck in Operatic History

Under the spell of Shakespeare

“One can’t escape one’s destiny,” Arrigo Boito commented tersely when Giuseppe Verdi wrote him in 1884 that he had begun work on Otello. “By a law of intellectual affinity that tragedy of Shakespeare’s is predestined for you.” With unerring dramatic instinct, Boito had written a libretto which adapted the original text to the demands of opera and Verdi’s artistry, while retaining the Shakespearean spirit. For one thing, Boito shortened the story, not only drastically reducing the length of the text but also completely omitting the first act of the five-act tragedy, which outlines the prologue to the story and is set in Venice. For another, he had no qualms about changing the stage “architecture” of the drama. In keeping with the composer’s wish that the flow of events be as continuous as possible, he tightened up the plot and sharpened the scenic contrasts.

Each of the four remaining sections of this drama of jealousy has a single setting and a clearly defined dramaturgical function. The first act abruptly transports us to a stormy night near the castle of the general of the Venetian fleet in Cyprus. It presents the three protagonists of the opera – Otello, Desdemona and Iago – and at the same time lays the foundation for the tragedy that follows. The two middle acts take place during the day in two different rooms of the castle and depict the gradual downfall of the title figure. Iago first succeeds in arousing Otello’s jealousy, then steadily fuels it with his malicious game. The moral poisoning of the hero continues, and his descent into irrationality also becomes publicly visible. After making up his mind to kill Desdemona because of her supposed unfaithfulness, with uncontrolled rage he throws her to the ground in front of the Venetian ambassador. The last act is set in the intimate space of Desdemona’s bedchamber, where the inevitable catastrophe takes place in the darkness of night: Otello strangles his wife, recognizes his delusion, then kills himself.

The collaboration between Verdi and Boito, which later would also result in Falstaff, is rightly considered a stroke of luck in operatic history. In the case of Otello, it is documented in just under 50 letters which the composer and his librettist, who was thirty years younger than Verdi, exchanged between 1879 and 1887. They not only provide fascinating insights into the origins of the composition, the working process and the not always relaxed relationship of the two artists but also discuss key dramaturgical questions. For example, ten months before finally completing the opera, Verdi wrote to Boito: “They talk, and they write me always about Iago!!! It seems useless for me to keep replying, ‘Otello,notIago, is not finished!!’ . . . – He is (this is true) the demon who moves everything, but Otello is the one who acts: He loves, is jealous, kills, andkills himself. And for my part it would seem hypocrisy not to call it Otello.”

The controversy over the appropriate title for the opera, in which the composer and his librettist took different positions at times, draws our attention to the strained relationship between the two male protagonists. Verdi und Boito agreed on the role of Iago as manipulator, mastermind and agent of the drama. At the same time, they both emphasized that he should not be understood or portrayed as a “demon in human form” but rather – as Boito expressed it – a “master of deception”. Iago is able to change his “image” depending on the situation and conceal his cynicism and wickedness from others behind his (also outward) magnetism. He is “easy and jovial with Cassio, ironic with Rodrigo. He is apparently good-humoured, respectful and humbly devoted towards Otello, brutal and threatening with Emilia”. He only shows his true character in the nihilistic “Credo” at the beginning of the second act, whose text inspired Verdi to what is perhaps the most daring music of his entire oeuvre.

Whereas the dramatic attractiveness of the figure of Iago lies in his complexity and manipulative power, Otello – as Verdi pointed out in the letter quoted – is the character who acts and, at the same time, undergoes a radical transformation. The depth of his fall is striking. At the beginning of the opera, the general of the Venetian Republic seems to be a powerful hero, wise commander and passionate lover. Overcome with raging jealousy, during the subsequent acts he experiences a loss of reality and self-alienation: “He was of sound mind, now he raves wildly, he was strong, now he is broken, he had a sense of right and wrong and integrity, now he commits a crime” (Boito). Negotiating this complex process of development, which Verdi brilliantly depicts in music, and the reversal of emotions connected with it vocally and dramatically is one of the great challenges of the role.

Horror rather than transfiguration

No other Italian opera composer of the 19th century confronted death as forcefully and relentlessly in his stage works as Verdi. “Opera must make people weep, feel horrified, die through singing,” he declared at the beginning of his career. He achieved this with unparalleled success in the fourth act of Otello, in which the orchestra plays a decisive role. The introduction to the act, played by the woodwinds, begins with a melancholy tune in the English horn, symbolizing Desdemona’s pain, isolation and hopelessness. Moreover, it anticipates the melody of the profoundly sad “Willow Song”, which Desdemona once heard from her mother’s maid and sings after a brief dialogue with Emilia. In this instance as well, Verdi made fundamental changes during the creative process and composed a vocal part which is extremely demanding for the performer. In a letter to Franco Faccio, the conductor of the premiere, the composer commented that the singer “like the Holy Trinity, must produce three voices, one for Desdemona, one for Barbara (the maid) and a third voice for the ‘Salce, salce, salce’ (Willow, willow, willow)”.

When one hears the melancholy sounds of the English horn at the beginning of the fourth act, one naturally thinks of the shepherd’s song with which this instrument opens the third act of Wagner’s Tristan und Isolde. We can only speculate as to whether it was actually a deliberate reminiscence of Verdi’s German antagonist. A comparison of the two works is interesting, however, because it increases our awareness of the fundamental differences. Wagner presents Isolde’s death as a process of redemption and transfiguration which brings the longed-for union with Tristan. Verdi, on the other hand, emphasizes through musical means the impossibility of “reconciliation” predestined in the literary source. Although immediately before his death Otello again takes up the kiss motif “in a husky sotto voce” (“Un bacio ... un bacio ancora ...”) (a kiss ... another kiss), which is heard at the climax of the great love duet in the first act. But his voice breaks off before reaching the final note, and the dark major chord which follows in the lowest possible instrumental register demonstrates unequivocally that the death of the tragic hero does not bring redemption but is rather the final confirmation of his fall.