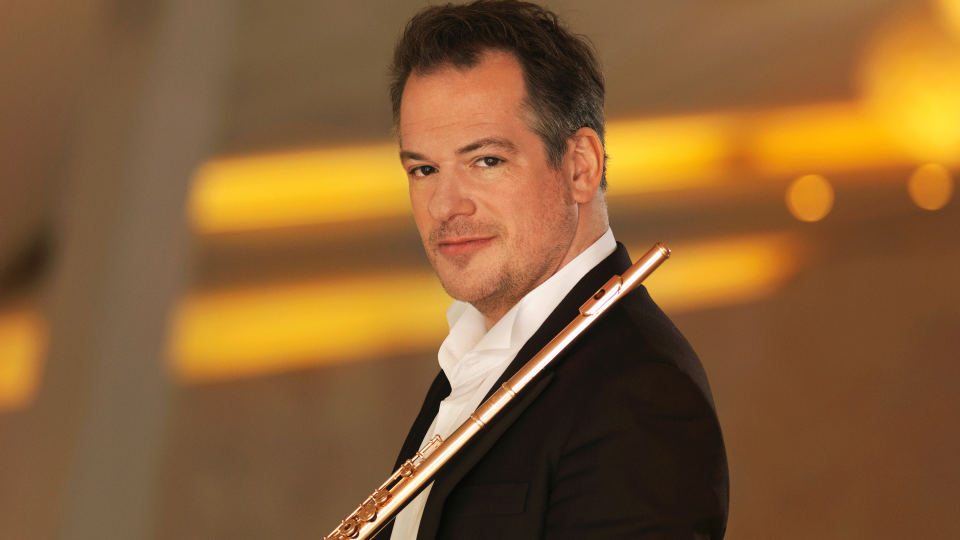 The Berliner Philharmoniker are noted for their ability to play even as a large orchestra as if they were performing chamber music. Their former chief conductor Claudio Abbado constantly urged his musicians to listen to each other instead of waiting for instructions from the conductor’s desk. Following on from the digital Easter@Philharmonie Festival with chamber music works performed by members of the orchestra, a new series now features them presenting works for small forces. As the corona crisis makes it impossible for the entire collective to meet for some time, this format is a wonderful alternative.

To launch the series, principal flute player Emmanuel Pahud met with harpist Marie-Pierre Langlamet and principal violist Amihai Grosz to play together in the Philharmonie. It is natural that in this constellation the choice fell on works from the French repertoire: in the chamber music of the German-Austrian tradition, the instrumental line-up was long dominated by piano and strings, whereas in France, certainly by the time of Berlioz, the nature of the sound of the most varied of instruments had become a central aspect of compositional conception. With works by Rameau, Ibert, Debussy and Ravel, the almost one-hour programme of the concert sketches a panorama of French music history that ranges from the Baroque to classical Modernism.

Maurice Ravel wrote his Sonatine for piano between 1903 and 1905. However, the richness of colour nuances inevitably evokes associations with other instruments. Carlos Salzedo’s arrangement for flute, viola and harp brings out the tonal imagination inherent in Ravel’s composition itself. With Jacques Ibert’s Deux Interludes and Claude Debussy’s famous sonata, Langlamet, Pahud and Grosz also play two original works for their instruments.

Claude Debussy was an avid admirer of nature; he once described people in relation to it as “transitory and disturbing transients”. And so his tone poem La Mer is characterised by the absence of man and is devoted entirely to natural phenomena with enchanting sensuousness. Claudio Abbado often said that a concert he attended at the age of seven with Debussy’s Nocturne inspired to become a musician. So it is all the more astonishing that during his time as chief conductor with the Berliner Philharmoniker, he did not perform with them La Mer, one of the composer’s major works. In 2009, however, when Abbado returned to his orchestra as guest conductor, as he always did in May, the “symphonic sketches” were finally on the programme. The critic of the Berliner Zeitung wrote about his interpretation: “In the virtuosity and high tension of the orchestra, Abbado’s art of seemingly allowing things to happen led here to a transparently multi-layered, perfectly illuminated performance that will not be forgotten.”

The concert is supplemented by a conversation between Marie-Pierre Langlamet and Emmanuel Pahud. Both became members of the Berliner Philharmoniker during the time of its chief conductor Claudio Abbado and they talk here about the years of transition, when colleagues in the orchestra, still influenced by Herbert von Karajan, faced a generation of young musicians.

Georges Prêtre conducts “A French Night” at the Waldbühne