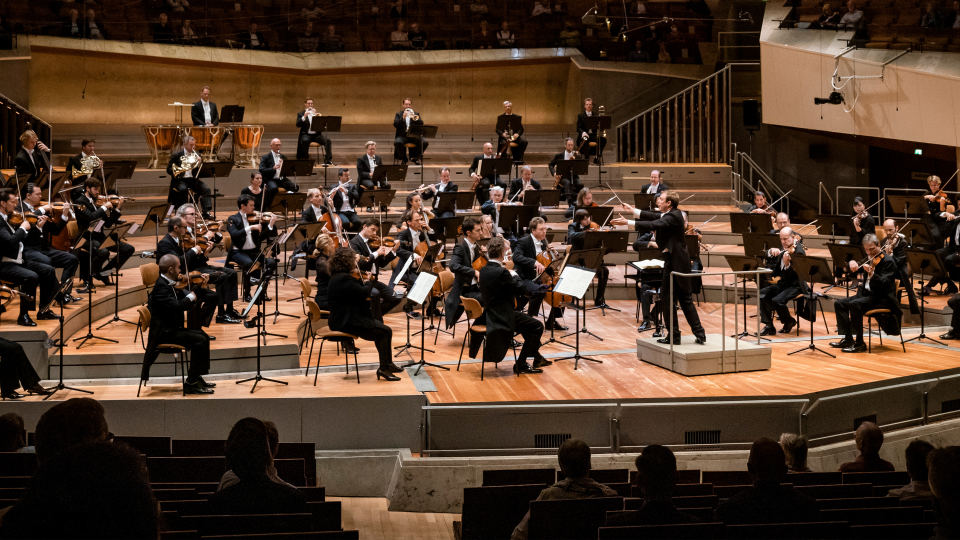 Alban Berg described his Lyric Suite as a “small monument to a great love”. In it, the composer musically encoded his passion for the married Hanna Fuchs, interweaving the tonal equivalents of the initials of them both, creating a highly personal piece of programme music. Beethoven’s symphony known as the “Pastoral” is also programme music, in which he expresses his love for nature – with bird calls, the splashing of streams and thunderstorms. A joyful homage to country life, conducted by Daniel Harding to mark the Beethoven anniversary year.

When Alban Berg set out for the International Music Festival in Prague in May of 1925 at the invitation of Hanna Fuchs-Robettin, he could not have anticipated that this journey would provoke an emotional storm in him: “I am no longer myself since this greatest of events,” he confessed to his hostess later. “One thought alone animates me, one desire, one longing: you!” The secret love affair continued until the end of the year – in Berg’s Lyric Suite it reverberates until today.

Not until the letters between Berg and his “eternal love” as well as a score with handwritten notes by the composer were discovered in the 1970s did the work reveal its explosive secret programme. The title is a reminiscence of the song cycle Lyric Symphony by Alexander von Zemlinsky, to whom the Lyric Suite is dedicated. Berg set the stirring memories of his fateful encounter to music under the guise of an ostensibly innocuous string quartet.

While the six highly expressive movements of the quartet capture this encounter in its entirety, from the carefree first meeting to the painful separation, the second, third and fourth movements, arranged for string orchestra by the composer in 1927, explore the amorous centrepiece of the brief liaison, climaxing with the passionate declaration of love in the Trio estatico. Disguising the work as an homage to his friend Zemlinsky, Berg twice quotes a melody from the Lyric Symphony to the words “You are my own”, and even the most nit-picking analysts were not able to discover the initials HF and AB woven throughout the intricate twelve-tone movement without the annotated score.

“More an expression of feeling than painting”

One of the first works to add lyrical content to abstract music was Ludwig van Beethoven’s “Pastoral” Symphony. Its programme was never a secret, however, but was already made public at its premiere under the title “Recollections of Country Life”. A contemporary critic reacted with astonishment and slight displeasure: “The path that Beethoven maps out is eccentric: he raises us above the ordinary and transports us, though rather roughly at times, into the realm of fantasy.” For Beethoven himself the composition of the “Pastoral” was a balancing act in which the music was never intended to be a mere illustration of the programme. Although he dared to imitate the calls of the cuckoo, quail and nightingale quite naturalistically, a musical menagerie such as that heard in Haydn’s Creation would never have occurred to him. Accordingly, he made it clear in the programme note for the premiere that the symphony was “more an expression of feeling than painting”.

It was no coincidence that Beethoven’s Fifth, known as the “Fate Symphony”, was performed at the same concert. He had worked on both symphonies at the same time, and they are complementary siblings: whereas the Fifth insistently builds up momentum until its triumphant finale, the relaxed flow of the “Pastoral” conveys tranquillity and expansiveness. The two symphonies were still played in reverse order in December of 1808; only later did Beethoven change their numbering. The turbulent introspection of the personal struggle with fate thus finds its energetic counterweight in the liberating external perspective of a universal experience of nature, which ends with “happy and thankful feelings after the storm”.

Daniel Harding is not only a conductor but an airline pilot as well ­– a combination that probably cannot be found anywhere else in the world. Both occupations demand a high level of communicative skill and team spirit. Flying has made him a better conductor, Daniel Harding said in an interview for the Digital Concert Hall: “I have learned to deal with difficult situations in a more positive and productive way.” Two great conductors took Harding, who was born in Oxford in 1975, under their wing at the beginning of his career: Sir Simon Rattle and Claudio Abbado. Rattle, at that time still music director of the City of Birmingham Symphony Orchestra, was so impressed by a recording by Harding, who was just 17, that he made him his assistant. He went on to assist Claudio Abbado and the Berliner Philharmoniker, with whom he made his debut stepping in for Franz Welser-Möst. Daniel Harding was only 21 at the time, and his appearance caused a sensation. The critics were amazed by his “wealth of experience” and his spirited conducting style. That was the beginning of a long-standing artistic friendship with the orchestra which has intensified in recent years. The highlights of their collaboration thus far have included performances of Schumann’s FaustScenes, Berlioz’s Romeo and Juliet, the European Concert at the Musée dʼOrsay in Paris in 2019 and interpretations of works by Gustav Mahler. Daniel Harding, who served as music director of the Mahler Chamber Orchestra from 2003 to 2011 and has held the post of music director with the Swedish Radio Symphony Orchestra since 2007, is regarded as one of the most interesting conductors of the younger generation because of his expressive, analytical interpretations. His success is due not least to the fact that he has no fear of risks. “As a pilot I do everything possible to avoid risk. But as a musician I have to take risks, because that is the only way to find beauty.”

A Mozart evening with Daniel Harding