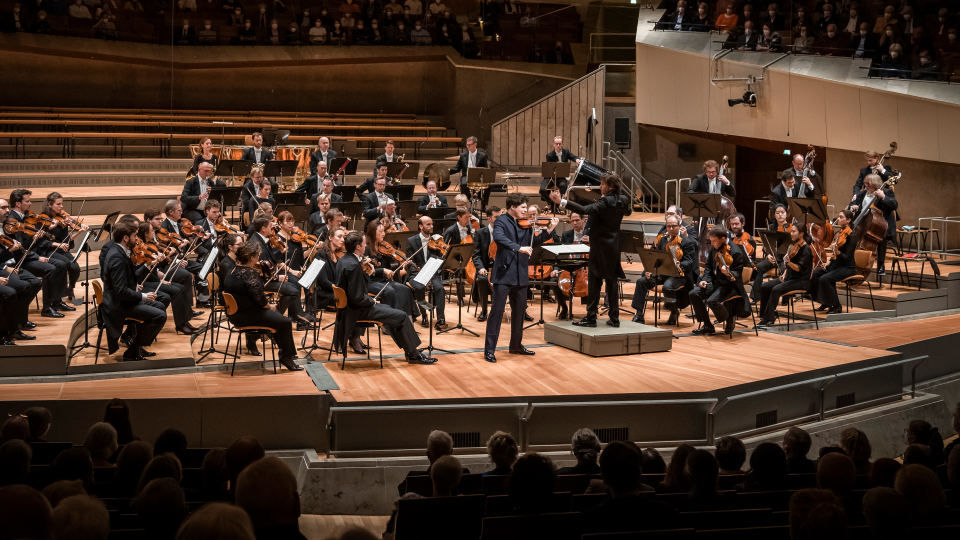 In this concert, both conductor and soloist make their debuts. Gustavo Gimeno was a percussionist with the Amsterdam Concertgebouw Orchestra for twelve years before he also devoted himself to conducting. He had not planned to change direction full-time – until Mariss Jansons, the orchestra’s chief conductor at the time, offered him the opportunity to become his assistant. The Spaniard has since become a chief conductor himself and a welcome guest of renowned orchestras. The German-American violinist Augustin Hadelich, who studied at New York’s Juilliard School and won the prestigious competition in Indianapolis, is no longer a violinist known only to a few insiders. Thanks to his expressive and technically flawless playing, he now plays with renowned orchestras all over the world. He will make his debut with the Berliner Philharmoniker with Sergei Prokofiev’s Second Violin Concerto.

In 1918, Prokofiev left revolutionary Russia for the USA. However, he maintained contact with his homeland, where his music was still allowed to be performed. He returned to Moscow in 1936 at a time when the Stalinist terror was at its height in the Soviet Union. Although Prokofiev wrote his Second Violin Concerto while still in the West, it seemed stylistically compatible with the now prevailing doctrine of Socialist Realism, as he had dispensed with the aggressiveness and glaring dissonances of his early works. The first movement is characterised by a pensive, expansive theme. The enchanting middle movement depicts a serenade. Heavy accents at first prevent the main theme of the finale from getting off the ground, before the pent-up energy is released in its wild final figures.

One of Prokofiev’s teachers was Nikolai Rimsky-Korsakov, whose orchestration skills are nowhere more impressive than in his most famous composition: the Oriental fantasy Scheherazade, inspired by the Arabian Nights. Even though he withdrew the programmatic movement titles that have since been reinserted, the composer did not deny that the recurring violin solo embodies the title heroine.

To open the concert, the programme also holds a kind of debut in store: Ligeti’s Concert Românesc. The Berliner Philharmoniker have recorded this early work by the composer, inspired by Romanian folklore, for the edition The Ligeti Project, but have never performed it in concert before.

“Late Night” concert with Matthias Pintscher and the Scharoun Ensemble