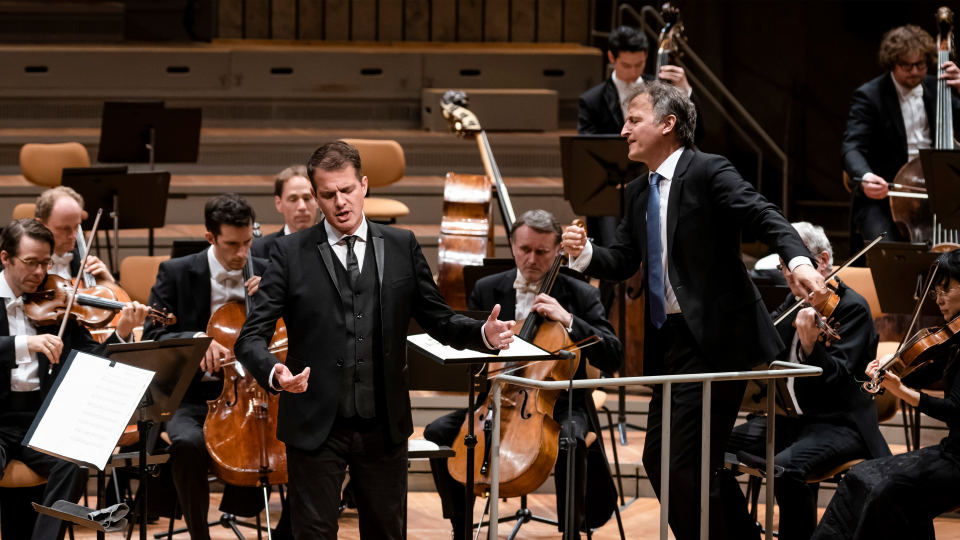 From their beginnings in the 1950s, the exponents of historical performance practice concentrated on the music of the Baroque era and subsequently worked their way far into the 19th century. This development is presented by the Berliner Philharmoniker under the baton of conductor Jean-Christophe Spinosi in the course of a single concert programme, ranging from Antonio Vivaldi, Mozart and Haydn to the early Romantic Gioacchino Rossini.

Haydn’s 82nd Symphony is the last of his six so-called Paris Symphonies, composed in the 1780s. The fact that these were commissioned by a French concert promoter is evidence of the international reputation that Haydn had by then acquired. The piece owes its nickname “L’Ours” (The Bear) to its final movement. It reminded contemporaries of the music that was played in the streets at the time to amuse the public and make bears dance.

With his final symphony, the Jupiter, Mozart reached a pinnacle of his compositional art. In the finale, the composer unleashes contrapuntal fireworks in which no fewer than five themes and motifs are heard simultaneously.

In addition to Spinosi, Philipp Jaroussky also celebrates his debut with the Berliner Philharmoniker in this concert. The French countertenor, who like Spinosi has come to prominence by founding his own ensemble, demonstrates in performances of Vivaldi and Rossini arias the broad stylistic spectrum that the leading representatives of his field have now mastered.

Baroque or rock – for Jean-Christophe Spinosi, a fan of Nikolaus Harnoncourt and Eddie Van Halen, they are not opposites. He demonstrated that, for example, with his “Tribute to Eddie Van Halen & Antonio Vivaldi”, in which he combined music of the Baroque composer and the electric guitarist in an exciting arrangement for orchestra, rock band and electric violin. The charismatic Frenchman, who was initially drawn to the violin, discovered his love for music of the 17th and 18th centuries as a 13-year-old. In 1991 he founded the Ensemble Matheus, which appears throughout the world and specializes primarily in performances of works by Antonio Vivaldi – but not exclusively, as successful productions of Mozart and Rossini operas at the Théâtre du Châtelet and the Théâtre des Champs-Élysées in Paris and Vienna’s Theater an der Wien show. Jean-Christophe Spinosi has collaborated closely with Cecilia Bartoli and Philippe Jaroussky for many years. He is also regularly invited to conduct orchestras, including the Deutsches Symphonie-Orchester Berlin, the Frankfurt Radio Symphony and the City of Birmingham Symphony Orchestra. In his encounters with such ensembles, there are – Spinosi says – “often wonderful surprises, a human and musical exchange that leads to entirely new experiences”. He appears for the first time as a guest with the Berliner Philharmoniker.

Radiant, velvety smooth and ethereal – PhilippeJaroussky’s countertenor has a unique, unmistakable timbre that is ideal for Baroque vocal music. He sang his way to the top as an interpreter of works by Claudio Monteverdi, George Frideric Handel and Antonio Vivaldi. The French artist never ceases to impress audiences with the virtuosic lightness of his voice, with which he seems to negotiate the most brilliant coloratura passages effortlessly. Philippe Jaroussky originally wanted to become a violinist, but then he heard the countertenor Fabrice di Falco singing Handel arias and immediately knew: “That’s for me! I essentially made the decision to become a countertenor on one evening,” Jaroussky says. He studied with Nicole Fallien and celebrated his first successes in productions of Monteverdi operas at the Théâtre des Champs-Elysées in Paris. Further milestones of his career were the collaboration with René Jacobs at the Staatsoper Unter den Linden, the world premiere of Kaija Saariaho’s double opera Only the Sound Remains at the Dutch National Opera in Amsterdam, in which Philippe Jaroussky also excelled as an interpreter of contemporary music, and his appearance at the opening of Hamburg’s Elbphilharmonie in 2017. The singer has enjoyed a long-standing artistic friendship with Jean-Christophe Spinosi, both of whom make their debuts with the Berliner Philharmoniker at these concerts.