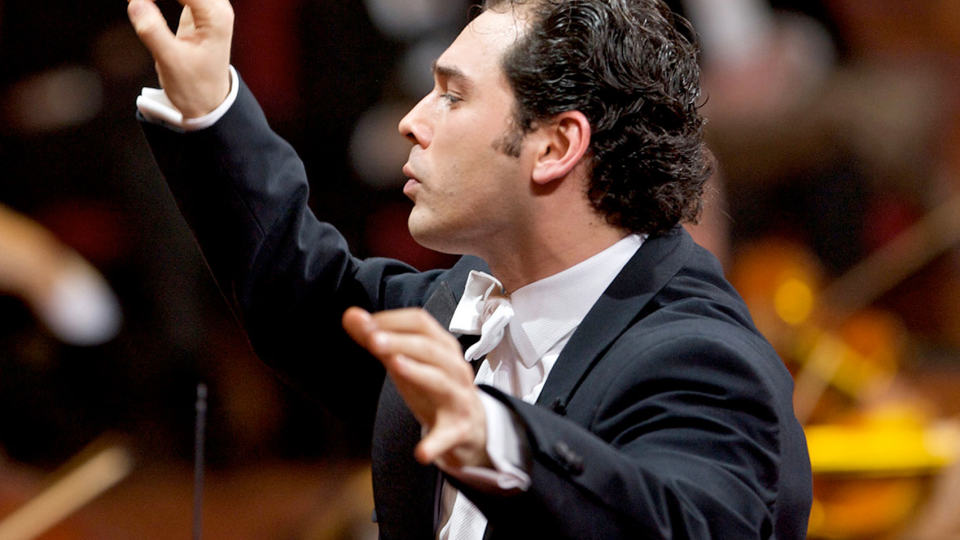 “The days are over when dissonance was used just for the sake of dissonance,” Sergei Prokofiev explained in a 1930 interview in the Chicago journal Music Leader. “A new simplicity – that is the current modernism.” It is no wonder that in his Violin Concerto No. 2, composed in 1935, the composer left out those grotesque aspects that characterised his first work in the genre: the soloist starts the piece alone with a lyrical, ethereally floating theme of unmistakably Russian origin.
For his Philharmoniker debut, Vadim Gluzman, who studied with violin legends Zakhar Bron and Dorothy DeLay and in Germany is still an insider tip, performs Prokofiev’s masterpiece on the “ex-Leopold Auer” Stradivarius.

The evening is conducted by Tugan Sokhiev, music director of the Deutsches Symphonie-Orchester Berlin, the Orchestre National du Capitole and Moscow’s Bolshoi Theatre. The first piece on the programme is Anatoly Lyadov’s impressionistically shimmering tone poem, The Enchanted Lake, op. 62, which unfolds a mysterious nocturnal tableau in the tradition of Rimsky-Korsakov’s fantastic opera scenes.
The symphonic highlight of the evening is Dmitri Shostakovich’s Fifth Symphony; its brilliant premiere was a sensational success: “As the storm of applause shook the columns of the concert hall,” writer Aleksandr Nikolaevich Glumov recalled, “Mravinsky lifted the score above his head to make it clear that this ovation was not ... owed to him, but to the creator of the music – Shostakovich.”

The Silence Before the Cheers

Some composers enjoy the mixed blessing of becoming world-famous with a single composition, a successful work that outshines (or eclipses) all their other compositions. One need only think of Max Bruch’s First Violin Concerto, Samuel Barber’s Adagio for Strings or Carmina burana by Carl Orff. Anatoly Lyadov, born in St Petersburg to a family of musicians, paradoxically became most famous for a score he did not write, however. In 1909 he received a commission from the Ballets Russes to compose the music for the Firebird, a theatrical project as opulent as it was ambitious, which hopelessly overwhelmed the exceptionally talented but catastrophically lazy Lyadov. “He always carried books under his arm – Maeterlinck, E. T. A. Hoffmann, Andersen: he liked tender, fantastical things,” recalled Igor Stravinsky, who stepped in for the disheartened Lyadov, like a youthful friend in need. “Lyadov was a short-winded, pianissimo composer, and he never could have written a long and noisy ballet like the Firebird,” Stravinsky maintained. “He was more relieved than offended, I suspect, when I accepted the commission.”

Lyadov worked on The Enchanted Lake, op. 62, a “fable tableau” for orchestra lasting only a few minutes, for nearly two years. “I have never composed anything like it!” he acknowledged in a letter in April 1907. “I am enthralled when I play it!” Almost one year later to the day he reported that it was complete, at least the preliminary version: “My Enchanted Lake is now finished, at least as far as the pure composition is concerned. I will still have a few difficulties with the orchestration! Oh, how I love it, my Enchanted Lake! How picturesque it is, how clear, with a multitude of stars hovering over the mysteries of the deep. But above all, it is uninhabited, with no entreaties and complaints; only nature – cold, malevolent and fantastic as a fairy tale. All the time I think about how to orchestrate it as poetically as possible!” Lyadov, the “pianissimo composer”, succeeded brilliantly with this work of art – in the truest sense of the word; he mixed, painted and dabbed on the shimmering, shadowy orchestral sounds with finesse and delicacy.

“Because I am Russian”: Sergei Prokofiev’s Second Violin Concerto

Anatoly Lyadov died 100 years ago, in August 1914, at the beginning of the First World War. Sergei Prokofiev, a former (and somewhat reluctant) student at the St Petersburg Conservatory, was Lyadov’s pupil and, although Lyadov found Prokofiev’s music “repellent”, he acknowledged that he was “nonetheless talented” and predicted that he would “develop his own mature style” – but Lyadov did not live to see it. After his wild, scandal-ridden early years, the path to “maturity” took Prokofiev far away, across land and sea. He left his Russian homeland soon after the October Revolution of 1917. Unlike his countrymen Igor Stravinsky and Sergei Rachmaninov, however, who emigrated permanently, Prokofiev returned in 1936 – to the Soviet Union, then ruled by the “steely” Stalin. “The air of foreign lands does not inspire me because I am Russian, and there is nothing more harmful to me than to live in exile,” the composer declared.

Prokofiev went through a severe creative crisis in these “foreign lands” – at his lowest point, he felt like a second-rate musician. His interviews from this period reflect the often self-tormenting redefinition of his art. Prokofiev repeatedly protested against the label enfant terrible often applied to him, countering it with his ideal of a “new simplicity”. He called for the primacy of melody, clarity (not simplicity) of the compositional technique, “light in the labyrinth” – above all, in his own works. Prokofiev’s Violin Concerto No. 2 in G minor, op. 63, completed in the summer of 1935 as a commission for the French violinist Robert Soetens, had its premiere in Madrid on 1 December of the same year, a few months before Prokofiev moved to Moscow with his family. The concerto is representative of this “new simplicity” at its finest, not least due to the phenomenal melodic inventiveness Prokofiev had at his disposal. Idealized Russian melody defines the character of this music as much as the broadly sweeping cantilenas – in the middle movement, for example. His creative block was overcome; the very thought of returning home proved to be an effective therapy for Prokofiev.

“Awaiting execution is a theme that has tormented me all my life,” Dmitri Shostakovich confessed. “Many pages of my music are devoted to it.” The composer, who was born in St Petersburg in 1906, was still enthusiastic about the October Revolution in his youth but was soon subjected to harassment of every kind in the Soviet Union. The Party praised him and threatened him, awarded him prizes for his works and had them taken off programmes, burdened him with official duties and relieved him of them. His music was attacked as “chaos” in Pravda, the central Party organ, and he was forced to the degrading rituals of public apology and atonement. Yet the Communist rulers could not prevent Shostakovich from bearing witness to the age to which he belonged. In his compositions he expressed what could neither be said nor sung, not even thought.

The socialist demands for monumentality and traditionalism are carried to absurdity in the first two movements of Shostakovich’s Fifth Symphony, made to seem ridiculous and exposed as signs of a brutal aesthetic of power. The theme of the symphony is the “making of a man”, the composer explained in an official statement. In fact, his music provides an unequivocal answer to the question of what becomes of the solitary, defenceless individual under a dictatorship whose megalomaniac demands show no respect for the boundaries of private life. The third movement is a Largo which completely avoids the ironic alienation, the “indirect speech” of the preceding movements and speaks an uncoded, subjective language of lamentation, grief and pain. Any doubts about Shostakovich’s alleged artistic resignation and accommodation must be dispelled in the light of this deeply moving composition. All that remains are the supposedly triumphant and exultant sounds of the finale, which particularly aroused the disapproval of Western commentators. Did Shostakovich’s Fifth, like the symphonies of the same number by Beethoven and Tchaikovsky, for example, follow a bold per aspera ad astra through adversity to the stars dramaturgy? “What exultation could there be? I think it is clear to everyone what happens in the Fifth,” Shostakovich said in a private conversation, unofficial and apart from the required public statements. “The rejoicing is forced, created under threat, as in Boris Godunov. It’s as if someone were beating you with a stick and saying, ‘Your business is rejoicing, your business is rejoicing.’”

What had Anatoly Lyadov written 30 years earlier? “To map out the path which humanity should follow and then actually force them to take this path is the greatest folly imaginable.”

Tugan Sokhiev hails from Vladikavkaz, the capital of North Ossetia, and studied with Ilya Musin at the St Petersburg Conservatory, while also attending the conducting classes of Yuri Temirkanov. In 2000 he won the main prize in the Third International Prokofiev Competition, an award that led to his appointment as principal conductor of the Russian State Symphony Orchestra and artistic director of the North Ossetia State Philharmonic. Among the international opera companies with whom he has appeared since 2002 are the Welsh National Opera, the Mariinsky Theatre in St Petersburg, the Metropolitan Opera, New York, the Théâtre des Champs-Élysées in Paris and the Teatro Real in Madrid. He made his debut at the Festival d’Aix-en-Provence in 2004 with Prokofiev’s The Love of Three Oranges. Sokhiev has been music director of the Orchestre du Capitole de Toulouse since the autumn of 2008, having been the orchestra’s principal guest conductor and artistic adviser since 2005. He took on the position of Music Director of Deutsches Symphonie-Orchester Berlin with the start of the 2012/13 season. Furthermore, he was appointed Music Director and Chief Conductor of the Bolshoi Theatre and Orchestra in January 2014. In addition to the Mariinsky Theatre in St. Petersburg and London’s Philharmonia Orchestra where Tugan Sokhiev has close artistic connections, he is also a much sought-after guest conductor all over the world. His debuts conducting the Vienna Philharmonic and the Berliner Philharmoniker in 2009 and at the beginning of 2010 respectively, were immediately followed by invitations to return, and in 2013, he made highly successful debuts with the Chicago Symphony Orchestra and the Gewandhaus Orchestra in Leipzig. Tugan Sokhiev last appeared with the Berliner Philharmoniker in May 2014 conducting works by Henri Vieuxtemps and Pyotr Tchaikovsky.

The Israeli violinist Vadim Gluzman was born in Ukraine in 1973 and trained in the Soviet Union (including under Zakhar Bron), in Israel, and in the United States (including at the Juilliard School under Dorothy DeLay). In 1994, he received the prestigious Henryk Szeryng Foundation Career Award. Gluzman is currently considered one of the most brilliant heirs to the great Russian-American violinist tradition of the 19th and 20th centuries. He performs with such orchestras as the Chicago Symphony Orchestra, the London Philharmonic, the Israel Philharmonic, the London Symphony Orchestra, the Leipzig Gewandhausorchester, the Munich Philharmonic and the NHK Symphony Orchestra. He works with conductors such as Neeme Järvi, Marek Janowski, Itzhak Perlman and Paavo Järvi. He is also a regular guest at the Verbier, Ravinia, Lockenhaus and Pablo Casals festivals. In Northbrook (Illinois), he founded the North Shore Chamber Music Festival together with his wife and long-time piano partner, Angela Yoffe. Vadim Gluzmanʼs broad repertoire also includes contemporary music: he has premièred and made first recordings of works by composers such as Giya Kancheli, Lera Auerbach and Sofia Gubaidulina. He also gave the British premiere of Michael Daughertyʼs Fire and Blood with the London Symphony Orchestra under the direction of Kristjan Järvi. Vadim Gluzman plays on a legendary Stradivarius, the “ex-Leopold Auer” from 1690. He now makes his debut with the Berliner Philharmoniker.

A Brahms evening with Sir Simon Rattle and Lars Vogt

2002 Europakonzert from Palermo with Claudio Abbado and Gil Shaham