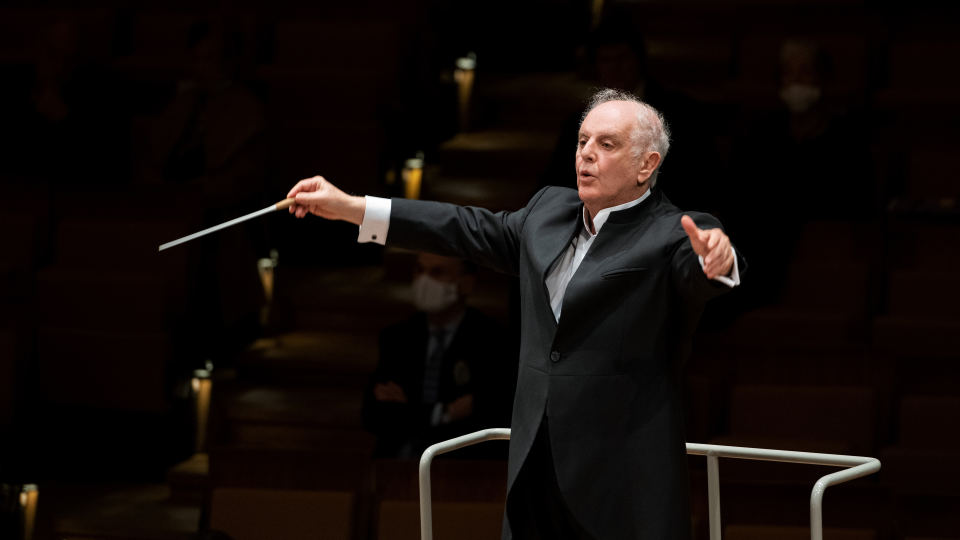 Everyone knows Bedřich Smetana’s The Moldau – but almost no one knows the cycle Ma vlast, from which this wonderful river portrait is taken. But Smetana’s vision of creating a panorama of his Czech homeland is only conveyed in the complete work, with its vivid descriptions of nature and dramatic depictions of myths and historical events. At the helm of this performance is Daniel Barenboim, honorary conductor of the Berliner Philharmoniker, who has a particular flair for the powerful colours of late-Romantic music.

It was not just an affront to Bedřich Smetana. No, the Viennese conductor Johann Herbeck touched the sore spot of an entire nation with a condescending provocation. The encounter took place in 1857 at the Altenburg House in Weimar in the presence of the host Franz Liszt, who was a friend of Smetana’s. When the question arose as to what great things particular countries had achieved in music, Herbeck answered: “The Czechs, nothing whatsoever,” since, he said, “all that they can bring forth is fiddlers, mere performing musicians ... You have not a single composition to show that is purely Czech which can adorn and enrich European music literature by virtue of its characteristic individuality.” Liszt immediately came to his friend’s defence, played Smetana’s Characteristic Pieces op. 1 on the piano and exclaimed: “Here is a composer with a genuine Czech heart.”

Although Smetana’s national pride was wounded, privately he had to admit that Herbeck was not entirely wrong. Czech culture had been almost completely suppressed during two centuries of continuous foreign rule – Smetana himself spoke better German than Czech, since Czech was frowned upon in the multinational Austro-Hungarian state as a dialect of the underprivileged. After this incident, the smouldering desire for identity became vitally important to Smetana: he had to give his people a musical voice. The plan succeeded. With his cycle Má vlast (My Country), composed between 1872 and 1879, Smetana not only reached the pinnacle of his life as a composer but also wrote an incomparable homage to the nature, history and legends of the Czech people.

The first of the six symphonic poems, Vyšehrad, named after the royal castle on a rocky promontory in Prague, opens with a magnificent harp solo. It represents the song of a bard whom Smetana envisioned as a narrator for his musical epic. The recollection of the splendour and downfall of the early Bohemian rulers is followed by Vltava (The Moldau), a contemporary but timeless nature painting of thrilling musical dramaturgy that is so familiar today. Šárka transports us to the world of folk legends. The Amazon warrior Šárka, enraged over the infidelity of her lover, takes bloody revenge on the male sex – Smetana’s setting depicts the events in almost minute detail up to the final slaughter. From Bohemia’s Woods and Fields follows with a conciliatory tone in which the idyllic beauty of nature is juxtaposed with the exuberance of a folk dance. Tábor honours the memory of Hussite religious fighters with the chorale “Ye who are warriors of God” as a musical war memorial. The same chorale is heard – now transformed into a visionary hymn of victory – in the closing movement, Blaník, which recalls the rescue of the Czech nation by Saint Wenceslas.

Smetana never heard the cycle himself: he suddenly lost his hearing in 1874. A devastating blow for the composer: “Only the thought of my family and the awareness that I must continue working for my people and my country kept me alive,” he confessed. The powerful beating of his “Czech heart” was existential for Smetana – the brilliant success of Má vlast, which is regarded as a national musical treasure to this day, shows that it had its finger on the pulse of time.

Daniel Barenboim holds a unique position in the musical world of our time. Both as a conductor and as a pianist, he commands a broad repertoire ranging from the works of Bach to contemporary music. His artistic work happily combines intellect and passion, and his performances captivate with beauty of sound and airy spaciousness. The artist also exerts great influence with his commitment to a peaceful solution to the Middle East conflict. It is thanks to this commitment that the West-Eastern Divan Orchestra, consisting of Israeli and Arab musicians, was founded, as was the Berlin-based Barenboim-Said Akademie. Both institutions are dedicated to the spirit of making music together across political and national borders. Daniel Barenboim, who grew up in Argentina and Israel, held senior positions in Paris and Chicago, and in 1992 took over as general music director of the Berlin Staatsoper Unter den Linden, whose Staatskapelle elected him chief conductor for life in the autumn of 2000. Barenboim is regarded as a leading interpreter of Richard Wagner’s stage works, which he has conducted in numerous performances at the Bayreuth Festival. An unusually intensive collaboration also links him to the Berliner Philharmoniker, where he is the sole honorary conductor. 2019 marked the 50th anniversary of his debut as a conductor with the orchestra. Highlights of their joint discography include piano concertos by Mozart and Bruckner’s symphonies. In January this year, Barenboim continued the tradition already established under Claudio Abbado and Sir Simon Rattle of performing as a pianist with the orchestra’s chief conductors, when he played Beethoven’s Third Piano Concerto under the direction of Kirill Petrenko.