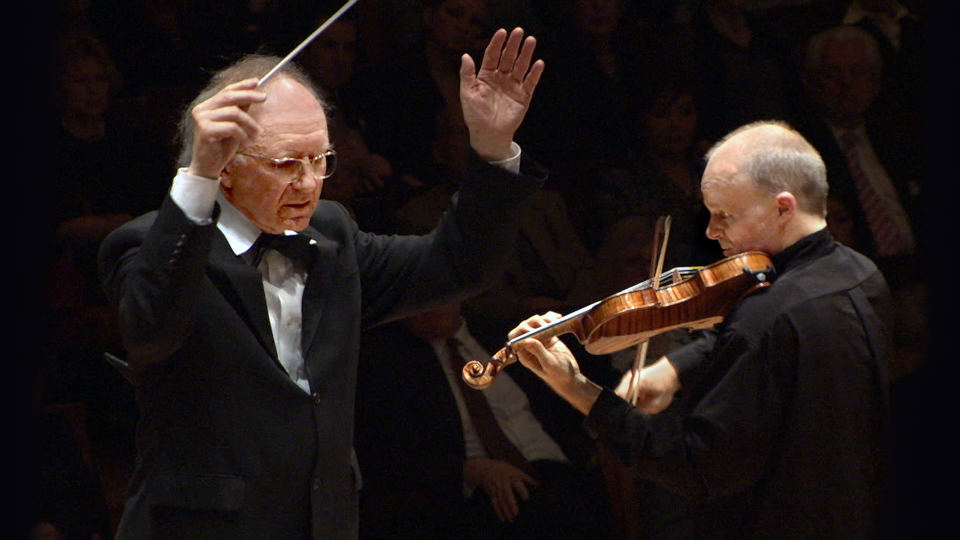 When the Berliner Philharmoniker combined Schumann symphonies with works by Bernd Alois Zimmermann on several concert programmes during the 2008/2009 season, it was logical that they invite Heinz Holliger. The Swiss composer, oboist and conductor has devoted himself intensively to Schumann’s music since his youth, which has also strongly influenced his own works. Holliger also has a close affinity with Zimmermann.

The programme was structured symmetrically, with a symphonic work and a composition for violin and orchestra by both Schumann and Zimmermann. Schumann’s Violin Fantasy was composed at the same time as his concerto for the same instrument, and after its premiere with Joseph Joachim it enjoyed a certain degree of popularity before disappearing almost entirely from the classical repertoire. One of the composer’s most popular works, on the other hand, is the Spring Symphony from 1841, which, with its opening motto, innovative formal development and the integration of songlike elements, represents a new type of symphony after Beethoven.

Like Schumann, Zimmermann also avoided historical and stylistic categories to a great extent. In his works one finds the influence of popular culture and quotations from music history as well as experiments with dodecaphony emulating Arnold Schoenberg. His work Alagoana, which was initially composed as ballet music, is characterized by a complex time structure and unusual scoring, with instruments such as vibraphone, guitar, celesta, harpsichord and saxophone quartet. The soloist for the concert was violinist Thomas Zehetmair, who made his debut with the Berliner Philharmoniker in 1985 and is known for both his unconventional interpretations of familiar repertoire and his strong commitment to rarely performed works.

Robert Schumann and Bernd Alois Zimmermann are linked by more than the Rhineland and a suicide trajectory in their biographies. Both were children of a great historical turning point, political and musical. Both depended on tradition as a solid foundation upon which to create something new, something of their own, while regarding its musical and expressive aspects as more important than innovative techniques. Both also earned recognition only posthumously – though not uncontested – as the most important German composers of their time. One could almost describe Schumann and Zimmermann as German music’s unlucky equivalent of the Dioscuri – Zeus’ twin sons Castor and Pollux from Greek mythology: they were beyond help on this earth, and even their highly complicated relationship with religion could offer them little hope.

The differences between the two are no less significant. Zimmermann’s mastery of the orchestral apparatus was complete, and he made use of a comparatively “more progressive” idiom than his Romantic doppelgänger. Above all, Zimmermann did not have the benefit of an unbroken received musical tradition: Schoenberg, Webern, Stravinsky, Bartók and Hindemith were not performed in the Third Reich; Zimmermann managed only with luck to find scores by Milhaud and Ravel as a young soldier in occupied Paris. Another stroke of good fortune was his Cologne teacher Philipp Jarnach, by whom he was directly “bequeathed” pre-war Modernism.

In later years Zimmermann developed a “pluralistic” compositional method. His point of departure was St. Augustine’s philosophy of time: the present is only essential when experienced as part of a simultaneous unity with the past (recollection) and future (expectation). When this is achieved, time has no end and death does not exist. Zimmermann’s work reflects this temporal simultaneity in its juxtaposition of multiple layers.

These pluralistic tendencies are already evident in his early ballet Alagoana.This is a work of the Bernd Alois Zimmermann who arranged light music for radio and appeared as a pianist with dance bands. Inspired by the study voyage of Zimmermann’s brother Joseph to the Brazilian province of Alagoas, Alagoana alludes to an Indian myth of love and death.

Zimmermann adopts some highly progressive compositional techniques in Alagoana, but his interlocking of different rhythms, his use of tone clusters and, especially, his functional employment of tone colours remain subordinated to an aesthetic of general accessibility. Brazil is present only symbolically: its throbbing rhythms and an exotic choice of instruments, including bongos, maracas, and güiro (scraper). Also indicative of the work’s dominant sonorities is its use of vibraphone, guitar, celesta, harpsichord and saxophone quartet.

Zimmermann’s Concerto for Violin and Orchestra of 1950 follows the convention of three-movement form, while paying homage to the contemporary zeitgeist in its use of twelve-tone technique, applied in the second movement, and in its rumba finale. The first movement contrasts a lyrical, richly scored expressive theme with a dancelike, lightly scored second theme. The main theme of the second movement is an unusually appealing specimen of musically compelling twelve-tone rows. A quote from the Dies irae serves as a profound interjection. Following a brief tutti, the agitation dies down, and the soloist leads the main theme into lonely heights – an evocative scene that recalls cinematic dream sequences.

The final rondo produces a comparatively frivolous effect with its rumba. Transcendental spheres and quotidian flatlands often coexist at close quarters in Zimmermann’s music – the Violin Concerto’s quality is not even remotely in doubt. The solo part alone, studded with trills and double-stopping, makes this work one of the most challenging virtuoso pieces of the modern repertoire.

The “Spring” Symphony in B flat major, op.38 – officially his first – is a fruit of Robert Schumann’s bountiful symphonic spring in the late 1820s and 1830s. Along with Beethoven, three symphonies that he heard during the 1840/41 Gewandhaus season provided him with models: Schubert’s “Great C major”, which Schumann discovered in Vienna in 1839, Mendelssohn’s Second, called “Hymn of Praise”, and the Bohemian composer Johann Wenzel Kalliwoda’s Fifth. Each of these works is distinguished by a brief but crucial brass motto which is motivically developed. Schumann follows suit. His theme paraphrases the line “Im Tale blüht der Frühling auf” (In the valley now the spring is blooming) from a poem by Adolf Böttger. Literary poetry and symphonic form are hereby united: the use of a motto offers the poet-composer Schumann the chance to write a poetic “symphony without words”. Already in Schubert’s “Great C major” he believed he heard “human voices” – for that no singers were required.

Schumann wrote the “Spring” Symphony in four days in January 1841. It was his first completed orchestral work, which explains certain insecurities. The motto played by horns and trumpets originally began on B flat, which, according to Schumann’s report from the first rehearsal, sounded “like they had colds”: the Gewandhaus Orchestra’s valveless “natural” horns could only produce the note with hand-stopping. So the B flat became a D. When the score was published in 1852, valved horns and trumpets could easily manage this passage, but Schumann stuck with the D.

The Larghetto is one of those Romantic “songs” that only a great master of the Lied could conceive. Magically, the theme blossoms in divided violins and only gradually comes into its own. Towards the end, the trombones take a surprising religious turn that adumbrates the main theme of the third movement, which then follows without a break: the demonic, rowdy Scherzo theme is almost identical to the trombone chorale.

The last movement completely justifies its marking Allegro animato e grazioso. It begins with a sprightly galloping main theme on violins, but this is soon interrupted by an energetically soaring string theme, which increasingly monopolizes the proceedings. Vigour and charm engage in a virtuosic dispute.

Any dispute in Schumann’s Fantasy in C major for violin and orchestra, op.131, is dressed up in its Sunday best. In 1853 Joseph Joachim had requested something substantial in the style of Beethoven’s Violin Concerto but initially received something rather reflective in the style of his Romances. The piece, whose first theme, presented by the orchestra, lends it an inimitably “Schumannesque” character, is one of elegiac serenity. This Fantasy betrays nothing of the mental breakdown which would drive Schumann to attempt suicide in the Rhine less than six months later. But it is also a valedictory work, one of retrospection and abating ambition. Schumann’s time for setting out on new paths was already past.

Heinz Holliger is internationally acclaimed not just as an oboist but also as a composer and as a conductor. He was born in 1939 in the Swiss town of Langenthal and studied the oboe with Émile Cassagnaud and Pierre Pierlot in Berne, Paris and Basel. He also had piano lessons with Sava Savoff and Yvonne Lefébure and studied composition Sándor Veress and Pierre Boulez. He began his international career as an oboist but in recent years has turned increasingly to conducting, in which capacity he has worked with the Cleveland Orchestra, the Royal Concertgebouw Orchestra of Amsterdam, the Philharmonia Orchestra of London, the Vienna Philharmonic, the Zurich Tonhalle Orchestra, the Orchestre de la Suisse Romande and the Chamber Orchestra of Europe, to name but a few. He first conducted the Berliner Philharmoniker in early 2002 in a programme of works by Haydn and Schumann, together with his own setting of four poems by Georg Trakl, with Cornelia Kallisch as the soloist. As a composer he works closely with other performers in his pursuit of new technical possibilities. The world premiere of his opera Schneewittchen in Zurich in 1998 was notably well received. Among Heinz Holliger’s awards are the Siemens Music Prize, the Frankfurt Music Prise, the Composition Prize of the Association of Swiss Composers and an honorary doctorate from the University of Zurich.

Thomas Zehetmair was born in Salzburg and studied with Max Rostal and Nathan Milstein. He was sixteen when he made his Salzburg Festival debut and seventeen when he won first prize in the International Mozart Competition. Since then he has appeared in all the leading concert halls in Europe and the United States, working as a soloist with international orchestras and conductors. Central to his work is his interest in contemporary music: in recent years he has given the world premieres of violin concertos by Heinz Holliger, James Dillon, Hans-Jürgen von Bose and Hans Christian Bartel. Thomas Zehetmair is also active as a chamber recitalist and appears regularly not only with his own Zehetmair Quartet, which he formed in 1997, but also with the pianist Pierre-Laurent Aimard. Thomas Zehetmair also pursues a successful career as a conductor and has been music director of the Northern Sinfonia since the autumn of 2002. In 2004 the Franz Liszt Academy of Music in Weimar conferred an honorary doctorate on him. He has appeared many times with the Berliner Philharmoniker since his debut in 1985. His most recent appearance was in October 2002, when he played works by Johann Sebastian Bach under the direction of Nikolaus Harnoncourt.