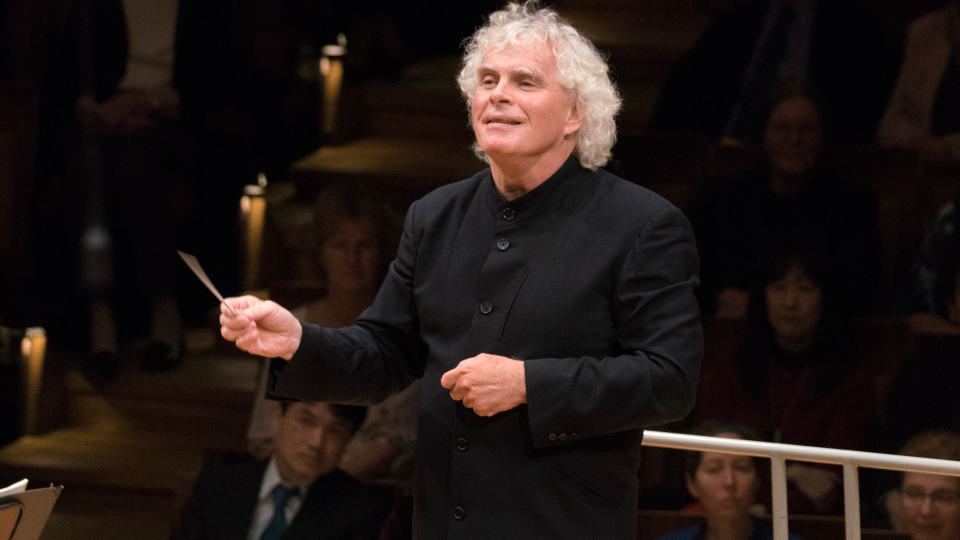 On their 2017 Asian tour, the Berliner Philharmoniker and Simon Rattle are presenting a Russian programme that underlines the range of qualities of the orchestra. Stravinsky’s Petrushka, for example, requires intense colours and concentrated energy, while in Rachmaninov’s Third Symphony, it is warmth and airy spaciousness that count. There is also a new work by the Korean composer Unsuk Chin. Before the tour began, the musicians presented the programme in the Berlin Philharmonie.

Igor Stravinsky is one of Sir Simon Rattle’s favourite composers. Since the beginning of his career, the Russian’s works have been an important component of his repertoire. He has also regularly included his compositions in the programmes of his concerts as chief conductor of the Berliner Philharmoniker. On this occasion, he presents Petrushka, a piece that Stravinsky wrote immediately after the enormous success of his first ballet The Firebird. While working on what was originally conceived as a concert piece for piano and orchestra, “a distinct picture” came to him “of a puppet suddenly endowed with life, and exasperating the patience of the orchestra with diabolical cascades of arpeggios”.

Sergei Diaghilev, the impresario of the Ballets Russes, recognised at once the potential in the music for a successful dance project and encouraged Stravinsky to turn it into a ballet. Petrushka takes us to the colourful, bustling world of a Russian fair. Against this background, the story unfolds of the ugly, stiff puppet Petrushka’s unhappy love for a beautiful ballerina who, in turn, has fallen for a handsome Moor. Stravinsky created very vivid and gestural music, making use of a montage technique in which he combines set pieces from Russian folk songs, dances and popular music plus striking motifs and melodic units into an individual, dramatic tonal language.

Rachmaninov’s Third Symphony is also rooted in the Russian musical tradition – albeit in a different way. With its wistful, mournful themes, its dance rhythms and numerous musical allusions, the work is considered the summation of late-Romantic Russian symphonic music. Rachmaninov wrote his third and last symphony in 1935-1936, nearly 30 years after his second. At that time, he had been living for nearly 20 years in the United States where he had emigrated at the outbreak of the Russian Revolution, and where he had built a phenomenal career as a pianist. The composer reported that public and press reacted “peevishly” to the symphony. “I am personally convinced that this is a good work,” he said self-assuredly. Between the compositions of the two Russians, Simon Rattle has programmed a musical “tapas”: the world premiere of a new short piece by the Berlin-based South Korean composer Unsuk Chin, part of a series which the Philharmonic’s chief conductor has commissioned from major contemporary composers.

Sources of Strength from the East

Petrushka, a Burlesque by Igor Stravinsky

Music by Igor Stravinsky, sets and costumes by Alexandre Benois, choreography by Michel Fokine, Vaslav Nijinsky in the title role and Pierre Monteux at the conductor’s stand: the Paris premiere of Petrushka on 13 June 1911 was not only one of the greatest successes of Serge Diaghilev’s Ballets russes. It was also the fulfilment of the long quest of the elites of Russian art for a national Gesamtkunstwerk: an unparalleled collective achievement in which the artists found a perfect synthesis because the finest masters collaborated. Contrary to Stravinsky’s later depiction of the events, Benois made a substantial contribution to the creation of the libretto. It was he who devised the plan for two levels of action: on the one hand, the two outer tableaus filled with crowds of people, on the other – or rather as the centrepiece – the two puppet theatre scenes about Petrushka, the Ballerina and the Moor as a drama in miniature. Two completely different spheres were also conceived for the music, enabling Stravinsky to create strikingly contrasting sounds. The confrontation of intentionally trivial folklore at the market square and psychological portraits of the individuals in the puppet story was a complete novelty in Russian art at that time. No less unorthodox was the deliberate simplicity of the harmony and rhythm in the market scenes: modernity appeared in a rough, deliberately archaic guise.

The associative richness of the score, its wit and poetic fantasy can only be understood with the scene in mind. That is particularly true of the conclusion, a turn of events uncharacteristic of the genre, which Stravinsky devised by himself. The ghost of the puppet Petrushka gloats above the roof of the theatre, mocks the Charlatan and the audience on and in front of the stage. Both spheres of the music come together here: while the bitonal fanfares of the rebellious puppet soar upward again, the muted horns convey the fading sounds of the fair.

Processes of approaching and penetrating different realms of experience are also a central theme in the works of Unsuk Chin. The composer, who was born in Seoul in 1961, became familiar with the music of the Western post-war avant-garde in Korea; she began studying with György Ligeti in Hamburg in 1985 and has lived in Berlin for many years. Nevertheless, she feels a strong connection to non-European musical cultures, especially East Asian. This is reflected in her agile and imaginative use of the percussion instruments, for example, in the brilliance and colourfulness of the sounds in general and a precise balance between overall structure and gestural freshness. “Cosmological concepts and scenarios served as inspiration for Chorós Chordón from the beginning to a possible end of the universe – without concrete references, however, and naturally without esoteric associations,” the composer observes about her new work, which she composed for the Berliner Philharmoniker.

The Greek title Chorós Chordón means “Dance of the Strings”. In view of the correspondence between cosmological and musical processes referred to by Chin, one must of course think not only of the acoustic strings on string instruments but also the vibrating strings in the string theory of physics, in which the strings are considered the smallest fundamental components of the universe. The idea that vibrating strings could produce the diversity of forces and particles in our world is undoubtedly fascinating from a musical perspective. But the composer does not want to draw too close an analogy – in the end, the string theory is only one small element of physics, whereas the models governing the concept of the cyclical processes of growth and decay in the world are much more broadly defined.

“The strings are called for without interruption and thus play a central role,” Unsuk Chin notes in her commentary on the work. The continuous sound of the strings slowly descends from disembodied noisy heights to more concrete registers and gains melodic contours, while increasingly incorporating more strings. A layer of pointillistic sound events forms the backdrop of this continuum in the percussion section – two of the four percussionists rustle tissue paper almost inaudibly – the harp and the piano. This sparkling and whispering gradually increases its intensity and complexity; at first, single woodwinds join in, later the brass. It is a subtle interplay of energy impulses which produces increasingly incisive figures. Finally, they combine their rhythmic forces in a “vehement dance”, according to the composer. The rest of the work depicts dissociation and disintegration of what has just come into being, a kind of composed “freezing to death” (Unsuk Chin) of what was alive a moment ago. But at the very close, the previous focussing of the strings on a single note is again opened to further interval steps – a new expansion, a second life cycle is suggested.

Sergei Rachmaninov’s Third Symphony was also composed in the “West”, on the banks of Lake Lucerne in Switzerland in 1935/36, and it is also the work of an emigrant. The specifically Russian atmosphere is not so easy to discern, however – it is probably most apparent in the elegiac mood and extremely supple, decidedly brilliant orchestral treatment. The often melodic brass and the percussion are assigned important roles, enabling Rachmaninov to shift the tonal character from intense passion to ruthless severity in a matter of seconds.

A melancholy, retrospective narrative tone seems to speak from the opening motto theme, a brief pianissimo phrase for clarinet, stopped horn and muted solo cello. It moves stepwise in the narrow intervallic range of a minor third in the style of a religious intonation. In the tutti outburst that follows, however, a tumultuously unrestrained, angular presence already makes itself heard: the central conflict of the movement is exposed. Two lyrical themes of delicate beauty are juxtaposed; Rachmaninov develops them painstakingly and excitingly. The development section, which concentrates on the first idea, evolves into a harmonically jagged, highly charged confrontation. The motto theme from the opening reveals its fateful meaning here.

The theme immediately appears again at the beginning of the slow movement. Like a solitary bard, the horn sings the melody accompanied by the harp, then the combined violin section takes over. The scherzo, a rhythmically tense, virtuosically orchestrated march, is interpolated into the Adagio. The finale is an exuberant infernal dance; at its centre is a strenuously disciplined fugato. The invocation of the apocalyptic Day of Wrath with the Dies Irae motif provides motivic coherence. The small-step figure meanwhile casts aside its connotations of death completely.

Despite the obviously showy conclusion, the first performances of the symphony with Leopold Stokowski and the Philadelphia Orchestra enjoyed little success. The composer himself was deeply convinced of the work’s merits, however. Certainly with good reason: the combination of a melancholy that appeals directly to the emotions and extremely austere orchestral modernity in its late phase is perhaps one of the most fascinating aspects of Rachmaninov’s works.

2005 Europakonzert from Budapest with Simon Rattle and Leonidas Kavakos

Our tour programme for Asia: Ravel with Simon Rattle and Seong-Jin Cho