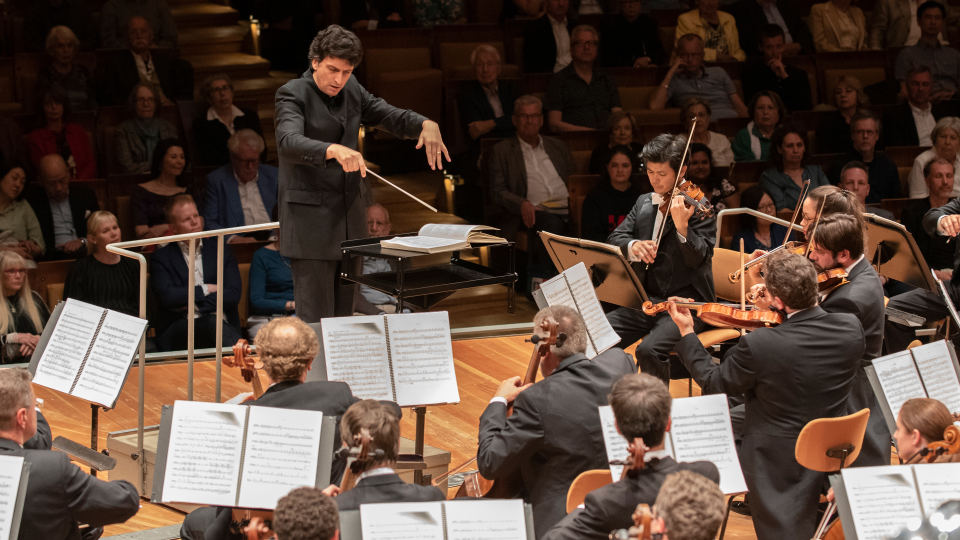 “I remember very well my first concert with the Berliner Philharmoniker. At that time, I was a student at the Karajan Academy, and we played Beethoven’s Third Symphony under Bernard Haitink. The energy emanating from the orchestra was incredible. I was immediately carried away by this energy. It was a dream! I am very grateful for my time in the Karajan Academy. I learned right from the start to adapt to the special sound of the Philharmoniker.” The fact that Bruno Delepelaire wanted to become a cellist was determined early: his grandmother was a keen amateur cellist, and as a five-year-old, he wanted to learn the instrument, too. Since 2013, the musician has been 1st principal cellist with the Berliner Philharmoniker; in these concerts, however, he will be not part of, but in front of the orchestra as the soloist in Joseph Haydn’s Second Cello Concerto.

Haydn’s concerto was still attributed to the cellist Anton Kraft in Gustav Schilling’s 1837 Encyclopaedia der gesammten musikalischen Wissenschaften, but he turned out not to be the author but the dedicatee. Kraft was then a first cello in the orchestra of Prince Esterházy and was later regarded as one of the greatest virtuosos in Vienna. As a result, Haydn was able to create a spectacular concerto, with intricate playing in high positions, tricky semiquaver triplets and rushing demisemiquaver passages. The conductor is Michael Sanderling, who himself was a solo cellist for many years. In these concerts, he makes his debut at the helm of the Philharmoniker.

The programme continues after the interval with Dmitri Shostakovich’s Seventh Symphony. It was created in the immediate vicinity of the fighting in and around Leningrad, when the city was encircled by German troops on 30 August 1941 and besieged for two and a half years during the Second World War: “To this day,” said Shostakovich looking back, “I know all the dates: I finished the first movement on 3 September, the second on the seventeenth, and the third on the nineteenth. I worked day and night. Sometimes bombs were falling all around and the air defence came into action. But I did not interrupt my work for a moment.” Talking about the so-called “invasion” theme of the first movement in which a subject accompanied by small drums increases in ever greater brutality in the course of twelve repetitions, Shostakovich remarked, “critics with nothing better to do will damn me for copying Ravel’s Bolero. Well, let them. That is how I hear war”.

The Rococo was no more peaceful than the Romantic age that followed it. Anyone believing it possible to recapture something of the good old days by means of music or literature is liable to be seriously disillusioned. The rules for producing euphony were already in force before early Romanticism began shaking them up, but this musical harmony had neither a social nor a political counterpart. Even Joseph Haydn, whose white powdered wig can elicit a smile and the false impression of a conflict-free past, had some close brushes with brutal reality. During his long lifetime, the composer’s homeland became embroiled in numerous wars: the Austro-Russian-Turkish War, the War of the Austrian Succession with its fatal pendant, the Seven Years’ War, the War of the Bavarian Succession and three Napoleonic wars of coalition ending in the disastrous defeats at Marengo and Austerlitz. In 1805, the French armies entered Vienna without resistance, but in 1809 Napoleon attacked the city. Haydn died from “exhaustion” during the bombardment on 31 May.

The spirit of that ill-fated time is not difficult to detect in many of his compositions. It’s already there in the titles of the “Nelson” Mass, the Mass in Time of War and the “Military” Symphony, as well as in the very first bar of the “Drum Roll” Symphony. This Realpolitik aspect was effaced in the reception of Haydn’s music; the 19th century, insofar as it took the composer seriously at all, concentrated on works distanced by idealism or religion such as The Creation and The Seven Last Words of our Redeemer on the Cross. That is scarcely an adequate appraisal of Haydn’s artistic individuality. He was pigeonholed as the joker among the great masters; one spoke of unimaginative “square symphonies” and an antiquated late rococo style.

The D major Cello Concerto was composed in 1783, shortly before the “Paris” Symphonies, at the beginning of Haydn’s final and most important creative period. It is a thoroughly Classical work: highly demanding for performers, readily understandable for listeners. The opening Allegro moderato, a quarter hour in duration, complies with the sonata form predominating in his symphonies, which in itself ensures easy comprehensibility. Though much shorter, the Adagio, surprisingly, is laid out in rondo form: Viennese Classical slow movements are typically in variation or three-part song form. The final Allegro, though presenting the soloist with some hair-raising technical challenges as well as forays into dramatic, symphonic and harmonically unsettling terrain, offers the upbeat ending one expected, and still expects, from Haydn.

Unlike Haydn, Shostakovich was never in danger of being deemed excessively humorous. The operetta Moscow-Cheryomushki and the two suites for jazz orchestra are not among his most inspired creations, and the suite for variety stage orchestra is memorable only for its world-famous waltz. Shostakovich – owing partly to his character, partly to the terrible circumstances of his life – is the man for tragedy, extravagant emotionalism and profound pessimism. When he becomes more affable, his wit promptly threatens to turn into sarcasm. For all its outwardness, his music is extremely complex and ambiguous, which is what makes its interpretation so difficult and, at the same time, so compelling. His works can be taken for ingenuous, but they can also be understood as a more or less subtle protest.

The genesis of the “Leningrad” Symphony extends back into the pre-war years. The beginning of the opening Allegretto is often interpreted as the description of a peaceful Soviet idyll. Based on Shostakovich’s experiences with the regime, this seems doubtful. He lost many friends to the Stalinist Terror of the 1930s and even feared for his own life. In any case, contented living on a collective farm would hardly sound like this symphony’s garish and quirky first theme. Soon, however, a lyrical second motif does venture into idyllic regions, only to be ravaged by the notorious “invasion” theme. Like the German armies following the assault, it marches brutally onward in stuporous, permanently escalating variations, accompanied by dive-bomber sirens. Yet this primitively commanding theme is not as straightforward as the Red Party stalwarts would have it. Shostakovich had already used a similar idea in opera Lady Macbeth of Mtsensk, which was banned by the censors. He did not want his Seventh Symphony to be regarded as a piece of pure anti-fascist propaganda, but rather as a requiem for victims of tyranny in general. Logically therefore, at the climax of this monotonous onslaught, just where one would expect the suggestion of a reversal and a depiction of the Red Army’s resistance, the “invasion” theme carries on almost unbroken, as if to say, musically, fascists and Bolsheviks aren’t so different! This perceived affinity contributed to the symphony’s denigration after the war. Andrey Zhdanov – it was no accident that Stalin made him the Party’s chief cultural arbiter – could instinctively recognize the work’s ambiguity, that its long stretches parading sheer Soviet kitsch were meant to expose him. Working on the Seventh in besieged Leningrad, Shostakovich had long since lost any illusions about the proletarian dictatorship.

The second movement accentuates this message using other means. The composer himself spoke of humour, but words like grotesque or parody probably better describe the expressive content of this Moderato. There is nothing idyllic in the deathly sad melodies of the two outer sections, which conjure memories of a happiness that never existed. In between them is a strident militaristic waltz, which is notimpossible to relate to the German invasion. The following Adagio, brewed, like the Moderato, in the Leningrad cauldron, displays the same three-part form. The framing sections consist of a chorale evoking the sound of bells and an organ, in other words a reminiscence of Soviet State Enemy No. 2, the Church. The Trio section intersperses desolate circus scenes. It would not be amiss here to detect a sarcastic attack on the Politburo rather than ancient Russian folklore.

The finale posed substantial problems for Shostakovich. He needed to thematicize the mother country’s victory in the great war, but that also implied the unchecked continuation of the Stalinist Terror. Deploying extravagant means, the movement presents a colossal portrait of war, beginning with the slowly marshalled resistance and ending with unstoppable triumph. A Baroque saraband recalls the sacrifice: fallen soldiers and murdered civilians – in Leningrad alone a million people lost their lives during the German siege. Was Shostakovich paying tribute to this horror by glorifying its end, the Red Army’s success? In any event, the endless surges of C major in the final apotheosis were spontaneously understood as such by the first listeners, and not only in the Soviet Union. Performances in London and New York in 1942 proved to be important components of the ideological warfare. The work’s direct impact transcended any artistic reservations. From his American exile, the anti-Communist Igor Stravinsky rejoiced in every victory of his Russian brothers-in-arms: even he was gripped by the radio broadcast of the American premiere of the “Leningrad”. The Berlin Philharmonic gave the German premiere of the symphony in December 1946 conducted by Sergiu Celibidache.

Michael Sanderling is one the few artists who, after an illustrious career as orchestra musician and soloist, has been able to forge a highly successful conducting career. In 1987, at the age of 20, the native Berliner became principal cellist of the Gewandhausorchester Leipzig under Kurt Masur, and from 1994 to 2006, he held the same position with the Rundfunk-Sinfonieorchester Berlin. As a soloist, he has made guest appearances with the Boston Symphony Orchestra, the Los Angeles Philharmonic and the Orchestre de Paris among others; as a chamber musician, he was a member of the Ex Aequo trio for eight years. In 2000, Michael Sanderling first appeared as a conductor with the Kammerorchester Berlin. In the years following, his conducting activities increased, and in 2006, he was appointed chief conductor and artistic director of the Kammerakademie Potsdam. Since 2011, he has led the Dresden Philharmonic. 2018/2019 is his eighth and final season as chief conductor with them. His most recent work there has focused on the symphonies of Beethoven and Shostakovich. As a guest conductor, he regularly appears with the Gewandhaus Orchestra in Leipzig, the Tonhalle-Orchestra Zurich, the Munich Philharmonic, the Konzerthausorchester Berlin, the Toronto Symphony Orchestra and others. He recently made his debut with the Royal Concertgebouw Orchestra. He has enjoyed success as an opera conductor with Philip Glass’s The Fall of the House of Usher in Potsdam and Sergei Prokofiev’s War and Peace at Oper Köln. Working with young musicians is very important to Michael Sanderling: he teaches at the Musikhochschule in Frankfurt am Main, holds masterclasses at the Franz Liszt University of Music Weimar, and regularly works together with the National Youth Orchestra of Germany and the Junge Deutsche Philharmonie. Michael Sanderling now conducts the Berliner Philharmoniker for the first time.