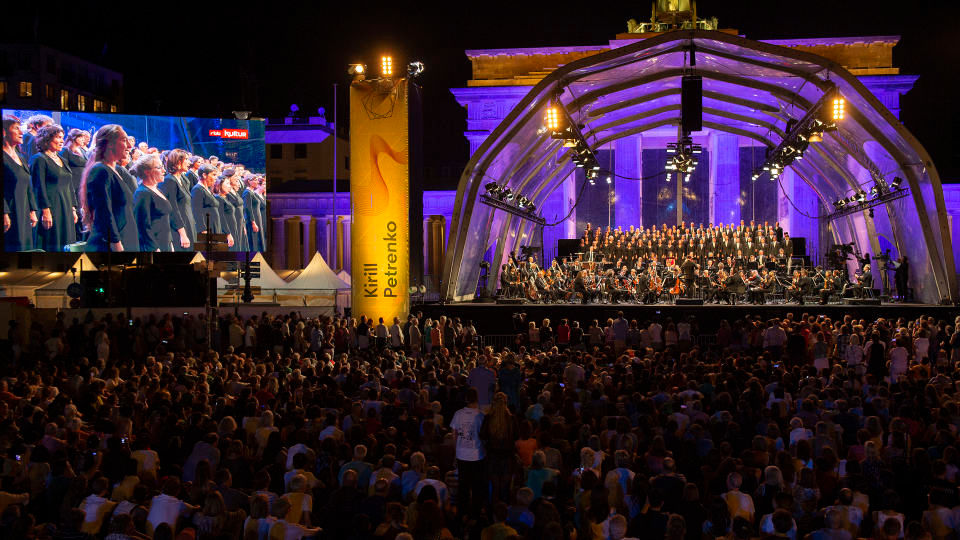 The classical music world had waited a long time and with great excitement and anticipation for Kirill Petrenko’s inaugural concert as chief conductor of the Berliner Philharmoniker. On 23 August 2019, the day finally arrived. Twenty-four hours later, Kirill Petrenko and the orchestra repeated their acclaimed performance of Beethoven’s Ninth Symphony at a free, open-air concert at the Brandenburg Gate. An audience of 35,000 people accepted the invitation, and just under ten times as many watched the event live on television, making it one of the ten highest-rating Saturday evenings of the year on the local rbb television channel. The conductor and the Philharmoniker had already begun the exploration of culturally and historically significant locations in the capital as a musical stage the previous year, when the opening concert of the season was repeated in the Schlüterhof of the newly built Berlin Palace. On that occasion too, a work by Beethoven was performed: his Seventh Symphony.

The Brandenburg Gate, built between 1789 and 1793, was originally called the “Friedenstor” (Gate of Peace) and is one of the most emblematic sites in Germany: architecturally, it represents early Classicism, and politically, the heyday of Prussia. The structure, located directly on the inner-city border, later was a symbol of the pain of the division of Germany, then, after the fall of the wall, an expression of the joy of reunification. Not least, the inaugural concert was therefore presented as part of the celebrations marking the 30th anniversary of the fall of the Berlin Wall. Incidentally, Beethoven would have been able to visit the gate during his visit to Berlin in 1798: at that time, he probably met Friedrich Wilhelm II, who was an enthusiastic amateur cellist. Beethoven was later to devote his Ninth Symphony to the Prussian king.

However, in the representative aspect indicated by these connections – the Philharmoniker’s concert also looked ahead to the celebrations commemorating the 250th anniversary of Beethoven’s birth in 2020 – the symphony and its performance by the Philharmoniker are in no way exhausted. For Kirill Petrenko, the composer’s last contribution to the genre is rather a work that “encompasses everything that is possible in the human soul, with all its exuberance and all its abysses,” as the conductor said in an interview. The performance of this momentous composition which has no comparison in music history by the Berliner Philharmoniker and their new chief conductor was correspondingly dynamic, rich in contrast and profound. They were supported by the Berliner Rundfunkchor and a quartet of soloists which included the soprano Marlis Petersen, who is this season’s Artist in Residence. The performance was an exhilarating start to the new era for all concerned: “After the final movement’s explosive hymn of joy, Schiller’s An die Freude, this most attentive of audiences was on its feet as one, anointing Petrenko with cheers. He grinned in response, his gratitude clear.” (The Guardian).